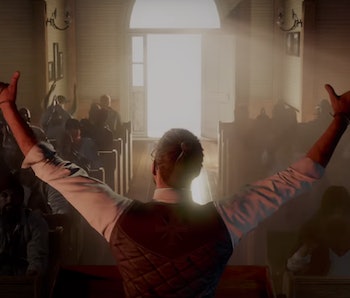 Last week, French video game publisher Ubisoft unveiled Far Cry 5, the newest entry of its action-survival franchise. Eschewing third world countries and tropical islands of previous games for a landlocked red state, Far Cry 5 pits players against a militant Christian cult, called Eden’s Gate, who have seized a small town in Montana. By itself, the premise isn’t so noteworthy and feels like an imitation of horror movies which have long villainized the rural country as dark and full of terrors. But in the current socio-cultural climate Far Cry 5 finds — 200 days after large swaths of conservative Americans elected Donald Trump to the presidency — such terrors are no longer hidden and, instead, people get harassed on Twitter.

Yet, as revealed in the trailers, Far Cry 5 isn’t directly referencing the virulent white nationalism that’s sprung across the United States over the past few years. Instead, Far Cry 5 is being remarkably inoffensive by villainizing cults and not conservative-leaning xenophobia. Shortly after the game’s announcement, a new hi-res image of the box art showed more of the mock “Last Supper” to reveal one lone black member. This would have been a revelation if the trailer, released on Thursday, hadn’t already shown black and brown Eden’s Gate followers. So here it is, a controversial video game that, as it turns out, isn’t all that controversial. Cults are bad! But did anyone need a video game to see why?

Of course, that hasn’t stopped a portion of gamers from feeling negatively towards Far Cry 5. Even if, supposedly, the game isn’t aiming at them. Whether or not this Change.org petition to “cancel Far Cry 5” is real — there’s evidence to suggest it’s a troll — there are still conservative-leaning gamers who take umbrage at Far Cry 5 putting a funhouse mirror image of themselves in the crosshairs.

On both Reddit and Twitter, offended gamers have sounded off: “Let me guess,” wrote a Redditor in a now-deleted post, “The game’s story is where you get kidnapped by religious hypocritical rednecks who make Christians look bad while also shoving some political crap agenda making negative nods to Trump ‘cause that’s the popular thing to do….”

“Lord this better not be an anti-Christian game,” wrote another user with the name “NotTheFriendliest” (how apt).

But maybe criticism against the neo-right isn’t what Ubisoft had in mind to start. In a lengthy interview with Polygon, executive producer Dan Hay of Ubisoft Montreal spoke of the influences that prompted Far Cry 5: 9/11, the 2008 housing crisis, where folks lost faith in their government, and the January 2016 occupation of the Malheur National Wildlife Refuge in Oregon, led by Ammon Bundy. “When I saw on television that a militia in Oregon had taken over a wildlife preserve and basically held the [Bureau of Alcohol, Tobacco, Firearms and Explosives] and the FBI at bay for 41 days,” Hay tells Polygon. “I was like, ‘OK. Now this makes sense.’”

There are also very clear lines between Far Cry’s fictional Eden’s Gate, led by the enigmatic Joseph Seed, to the very real Peoples Temple, led by Jim Jones, whose church ended in a mass suicide in 1978 in Jonestown, Guyana. Like Jones, Joseph Seed doesn’t appear to tolerate intolerance. All folks are welcome, so long as they pledge allegiance to the cause.

For now, Far Cry 5 is just a video game, that won’t be released until early 2018. But aside from the new setting and brand new character creator tool — which offers players avatars of any skin color or gender as they square off with Eden’s Gate — Far Cry 5 is striking nerves among those who regularly claim to be defenders of free speech and rail against political correctness, until they themselves are the subject. But with a release date slated for February 27, it will be a long while before anyone can actually start getting up in arms.