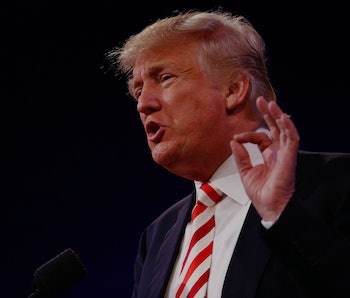 A polarizing and extreme sector of the right wing, called the alt-right, has gained considerable traction lately, and while Donald Trump may not be explicitly associated with the movement, his uproariously bigoted and nationalistic ideology aligns just enough to provide a platform for their ideas.

The alt-right refers to a collection of right wing ideologies that condemn mainstream conservatism in the United States – and outwardly champion white supremacy, misogyny, antisemitism, anti-immigration, anti-globalism, and any other bigoted belief you can think of. Alt-righters obviously abhor liberals, but they equally detest mainstream conservatism, lamenting the disappearance of their staunchly Republican brethren from the political scene.

Although it would be most rewarding to ignore the alt-right until it dissolves into a pile of dust, progressive futurity demands we remain informed about the opposition, no matter how absurd. I listened to an episode of the alt-right’s most popular podcast, Fash the Nation, hosted by two douchebags with the inane pseudonyms Jazzhands McFeels and Marcus Halberstram. These are five things I learned from the experience:

The Movement is Male

The alt-right is reserved exclusively for white, Christian, male, mouth-breathing trolls who use the darkest corners of the internet, like 4chan and Reddit, to spread their ideas and interact with each other. At the beginning of the podcast, McFeels shouts out to those who donated money to the show that week (he repeatedly mispronounces the word “donations,” just by the way), all of whom are men. At certain points in the segment, McFeels and Halberstram bro out so hard, the use of “dude” inserted between every other word is the only thing you can concentrate on.

Facts Can Be Fought With Non-Facts

The media is the alt-right’s stated foe and seems to inspire McFeels and Halberstram to make shit up left and right. No matter what headline-making bigotry Trump gets up to in any given week, they constantly shift the conversation away from him to spotlight Clinton’s “crimes.” “They’re manufacturing controversy around Trump where it doesn’t exist, and they’re suppressing real controversy surrounding Hillary Clinton,” one of them notes during the one year anniversary segment. McFeels and Halberstram isolate the most minute circumstances, like polling inconsistencies, in unceasing attempts to discredit the media. They want you to believe you’ve been lied to all your life. That the alt-right is a beacon of truth.

The Endgame is Publicity

At the beginning of Fash the Nation’s one year anniversary, McFeels and Halberstram take a moment to highlight the “exponential” growth of their fan base, saying they’re not even sure how it could be calculated at this point. “Ben Shapiro was talking shit about us and admitted there’s an area of the right we control now,” one of them said. The alt-right’s motto may as well be “the only bad publicity is no publicity” by virtue of their only clear cut goal: to be noticed. The alt-right vocally supports Donald Trump for the Presidency, but they relish the opportunity to voice their ideas afforded by Trump’s campaign more than the prospect of him actually being elected. “We always said we’re going to use Trump. He’s not going to use us.”

There’s Not Much Here to Fear

If you’re able to maintain the smallest bit of faith in humanity after listening to just 10 minutes of this insufferable podcast, you should be proud of yourself. The alt-right’s agenda is so repulsive it will likely leave you feeling despondent about the future of our nation. But, learning more about it—as disturbing as it is— prevents it from gaining traction on a wider scale. It may seem like the United States is headed directly toward the shitter, given the abrasive political climate, but the alt-right is definitely not invited to come with.