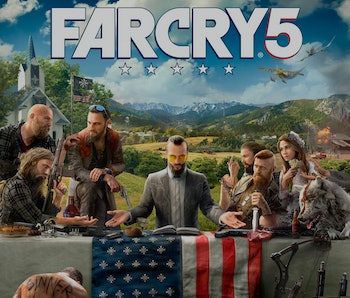 On Wednesday, the world had its first look at Far Cry 5. Although it’s not set to be released until March 2018, the fifth installment of French publisher Ubisoft’s survival series looks like it will poke fun at red state rural America. A first-person shooter in which the player guns down Christian extremist villains is a daring move from Ubisoft, and it’s an interesting change of pace for a series that’s long appealed to politically apathetic or conservative-leaning gamers.

The hyper-realistic promotional art released on Wednesday depicts a Caucasian family dressed in their finest red, white, blue, and camouflage, gathered around a picnic table bearing the American flag. Their positions evoke da Vinci’s The Last Supper, which, of course, echoes the fundamentalist Christian churches lining the Bible belt. The family — or, more likely, a fictional Christian cult — is surrounded by the sprawling Montana landscape, with mountains in the distance and plains in the foreground under an unsettlingly blue sky. Welcome to Hope County, Montana, Ubisoft says in its ads.

Upon the art’s reveal, the internet (mainly via Twitter and Reddit) responded in two extreme ways. (Less attention was paid to the equally unsettling teaser trailers, each less than 30 seconds long.) Those who liked the concept praised Ubisoft for reversing its notorious history of sending white protagonists to shoot up “exotic” areas in developing nations. Those who hate the art? Well, they’re the folks you’d expect to hate it, those who decry attempts at “political correctness” and call others too soft, that is, until satire turns on them.

In the genre of action-survival video games, several things remain constant: The protagonists are usually capable, resilient white men, the lush exotic locales are hazardous, and enemies you mow down by the truckload are almost always the people of color inhabiting a game’s environment. From Uncharted to the new Tomb Raider, first-person global shooters aren’t going anywhere. The companies producing them continue to make silly mistakes, too; as comedian Kumail Nanjiani points out in Beta Male, Call of Duty filled its street signs in Karachi with Arabic words, ignoring the fact that the city primarily speaks Urdu. No game better embodies this awkward concept than Far Cry, but now the franchise has flipped the script.

Montana isn’t another exotic island (Far Cry, Far Cry 3, Far Cry Instincts) or an African savannah (Far Cry 2), and its gun-toting Christian cult leader isn’t another Bhutanese warlord (Far Cry 4). For the first time, Far Cry — which appeals plentifully (but not exclusively) to gun-obsessed males — appears eager to challenge its audience with a disturbing reflection of extremism in America.

Is Far Cry 5’s America our current America? Signs in the teaser trailers point to a culture more dystopian and speculative. In the poster, there are more guns, bullets, and weapons on the table than there is food. A building in the background is on fire. The stars on the flag have been swapped for an emblem like the German Iron Cross, symbols of valor awarded by the Nazi party during WWII. The only woman in the scene is dressed in a white bridal outfit, as if to say the only things that define women in this fictional world are marriage and virginity. (And yeah, there’s a guy held hostage with “SINNER” carved into his back. Can’t forget him.)

With over a year until the game’s release and a trailer expected to debut May 26, we haven’t gotten a full picture of what Ubisoft plans to do with its franchise. A week-old Reddit post from someone claiming to have first-hand knowledge of the game seems as reliable as any. Days before the Wednesday reveal, a user hiding behind a throwaway account (a dummy account used to mask identity) broke their non-disclosure agreement and revealed the gist of Far Cry 5 to Reddit’s gaming community. Their guesses, as best as anyone can tell, seem on the money.

“The general thrust of this game is that it will take place in present day, and feature the protagonist taking on a Jim Jones or David Koresh-like religious cult in a small town in Montana that’s been populated by, essentially, Doomsday-preppers bent on furthering their cause,” writes the user. “So, modern-day weaponry and modern-day vehicles, plus a hilly, mountainous backdrop. Honestly, it sounded at the time like they were using that to their advantage, given that when you think of Far Cry you kind of think of mountains and hills and the kind of backdrop Montana has in spades.”

As more is revealed about Far Cry 5, there will be inevitable comparisons to 2013’s BioShock: Infinite, the acclaimed hyper-stylized shooter, which satirized American exceptionalism and too-easily appealed to Tea Party conservatives, who seemed unaware the game was lampooning their values.

This critic believes that Far Cry has never, ever been explicitly racist. At its worst, the series has just been potentially offensive due to its repetitive plotlines: white guys fight while far away from home and are surrounded by dangerous, nameless brown people. Far Cry also isn’t a sharp social satire; the series just hasn’t had good writing so far, and even games that do (such as BioShock: Infinite) wind up with nothing pointed to say, relying on the satire for set dressing. But if Far Cry 5 is sharp enough to at least provoke something in its players, then maybe the dependable thrills will be good enough.