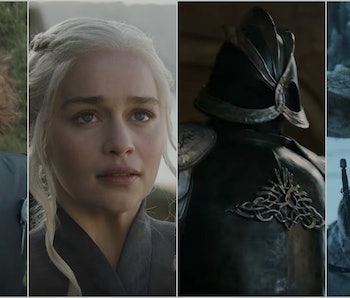 At last, the first official trailer for Game of Thrones’s seventh season is here, and it brings war, war, and more war. As Queen Cersei laments to Jaime about their enemies in the north, south, east, and west, shots of Lannister armies assembling and fighting intermingle with shots of Daenerys’s Dothraki and Unsullied forces. Her dragons are there too, of course. Season 7 looks to be a clash of queens like no other.

Elsewhere in the trailer, Jon Snow is seen tussling with Petyr Baelish and running in a cold environment, Arya is shown traveling on horseback and lighting fires in deserted woods, and Sansa is shown talking to the slippery Littlefinger. Curiously, Bran Stark does not appear. Neither does the recently returned Sandor Clegane. As the trailer scrolls through its images quickly, you might have missed some of the smaller details. Here’s a breakdown of what you might have missed or overlooked:

Most shots of Arya Stark in the trailer are outside. She’s shown riding horseback through woods sprinkled with snow and lighting a fire in presumably the same woods. However, one blink-and-you-miss-it shot shows Arya inside. She’s looking urgent, either hiding or ducking under a table during dinner. As this is Arya, she’s likely about to kill someone. The shape behind her looks like a stove. Because of that, it’s most likely not the Great Hall in Winterfell, but previous Season 7 photos indicate she will be returning. Judging by this shot, she could stop by a tavern on the way and encounter danger.

The trailer reveals that Daenerys and Tyrion are at Dragonstone, Stannis’s old stomping grounds that was once a Targaryen ancestral stronghold. This means that Daenerys is in Westeros and has secured herself a nice headquarters — you’d think her Hand of the Queen would be happy. But Tyrion, who appears in the trailer only briefly, looks distraught as hell. The shot pans out to reveal him standing on a cliff watching Dany’s dragons, which have grown even bigger. Again, this is something he should be happy about, as they’re a valuable tool in war. Either Tyrion is realizing their capacity for destruction and regretting signing on to Dany’s team, or he’s pondering his own connection to these creatures. After all, it’s a long-running fan theory that Tyrion is secretly a Targaryen.

The last time Game of Thrones had a proper ship battle was Season 2’s epic “Blackwater,” but Season 7 will bring another. When Theon briefly appears in the trailer, he’s surrounded by flaming embers — so the Greyjoys are most likely involved in this. Theon and Yara’s uncle, Euron, was out for their heads when Season 6 left him. The only remaining question is whether Theon and Yara are still with Daenerys for this battle or whether she went to Dragonstone without them, leaving the siblings to fight Euron alone.

While the trailer does not reveal the owner of this terribly infected looking Greyscale arm, the most prominent main character with Greyscale is Jorah. Recall that the deadly disease turns you into a Stone Man, which is essentially a rock zombie. When Season 6 left him, Daenerys had commanded him to find the cure. His arm was also only stone-like in one small area on his inner forearm. Not only is the infection much worse in Season 7, but this weird hatch his arm is in raises questions. Is putting his arm through a hatch part of the cure? Is he trapped somewhere? If so, is he with Jon Snow, as they have been spotted together on the set?

Jon is shown in Winterfell, first being hailed as the King in the North and then clashing with Petyr Baelish. His most interesting shot, however, comes later in the trailer. He’s in a snowy environment that is ostensibly North of the Wall — unless winter has come to the North fast. But most ominously, he seems to be running for his life along with Tormund. His sword isn’t in his hand, which indicates that he isn’t running as part of a battle, like “Hardhome.” The threat seems to be sudden and unanticipated.

In the most recent batch of Game of Thrones Season 7 photos, Daenerys is riding her gigantic dragon in battle. There was not enough background to pin down the location, but it seemed to be Dothraki vs. Lannister forces. The trailer narrows the location down. This grassy plane is far enough outside of King’s Landing for an army to spread out, but it’s also far enough south that winter hasn’t hit it yet. It’s therefore somewhere between King’s Landing and the North — perhaps near Tyrell home Highgarden or Lannister home Casterly Rock, two locations that will appear on-screen for the first time in Season 7.

Last but not least, there’s a shot of Ser Robert Strong, who was formerly known as the Mountain before Qyburn resurrected him into a Frankenstein-like guard dog for Cersei. The most popular Game of Thrones fan theory posits that the Mountain and his brother the Hound will someday fight to the death in a challenge known as Cleganebowl. Does his mere presence in the trailer mean Cleganebowl is 100 percent happening? Of course not, but it’s curious that the trailer chose to include him when it skipped larger characters like Bran Stark. It could be a sign that Cleganebowl is impending. Get hyped.