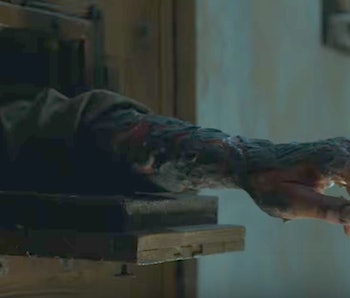 Last time anyone saw Jorah Mormont, he was on his way to find a cure for Greyscale, the flesh-eating, skin-flaking disease he was cursed with during Season 6 of Game of Thrones. Fans probably got a new glimpse of him in the Game of Thrones Season 7 trailer that was released on Wednesday, and it’s not a pretty one.

Jorah left his beloved Daenerys Targaryen behind in Season 6 to search out a Greyscale cure after contracting the disease during a fight. If he doesn’t find it, he’ll turn into a rotting rock zombie, most of whom congregate in the ruined city of Valyria, a former seat of power in old Westeros. Valyria was once home to House Targaryen before a mysterious event led to its destruction.

As the only main character with a direct link to Greyscale at the end of Season 6, it would make sense for that brief shot in the new trailer to be Jorah (and that kinda looks like Jorah’s yellow shirt, too). He’s reaching through a hatch in a wooden door. Being locked behind a door — perhaps in a prison cell — might be a part of the cure, or maybe he’s being separated from society to keep him from passing the disease along.

But don’t count Jorah out yet.

Jorah was spotted on the set of Season 7 a while back alongside Jon Snow, Davos, and the long-lost princeling Gendry. His return means that he’s either found the cure or returned to be beside Dany, at some point in Season 7, after accepting that he’s going to die. Hopefully, it’s the former.