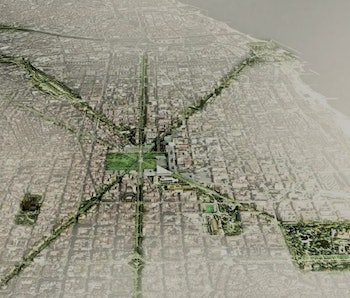 A map of Barcelona will show you that while the city has a plethora of green spaces, they’re far from the city center. And after a few millennia of settlement, the city has been developed within an inch of its life, making change hard.

But despite being stuck, almost literally, between a rock and a hard place, the city recently released an ambitious re-greening plan. Barcelona’s “Plan Verde 2020” envisions a “blooming mosaic of plants and leaf cover” with plans for five new parks that will connect with other green spaces, according to CityLab.

No major park can be carved out of an environment this densely built, but the city nonetheless plans to transform its core into a blooming mosaic of plants and leaf cover. The city has found space for five new gardens, which will ultimately be linked up to existing open spaces with lush new corridors of greenery that will create a seamless habitat for urban fauna.

Even an ancient city — Barcelona was founded as a village some 2,000 years ago — has room to add green space for its 1.6 million residents. While Barcelona is unique, it isn’t alone. Cities around the world are also recognizing the health benefits and environmental importance of their own tree canopy and working to improve it. Thanks to MIT’s Senseable City Lab and other data visualization efforts, they might know where to start.

Earlier this spring, the lab published its Treepedia, which analyzes the canopy cover — otherwise known as “trees” — of several major cities around the world.

Using Google Street View panoramas, the Treepedia sorts ground-level tree data into a map with varying degrees of green representing the density of the canopy on that street. Because it came from street view, it didn’t include urban parks, instead focusing on the trees planted (or, in the black and red places, not planted) on your block. They also assigned each urban locale a score, out of 100, to indicate the percent of the city that’s canopied.

These visualizations, which range from Singapore’s green score of 29.3 to Paris’s paltry 8.8, are probably the coolest images of city canopies available right now. At a high level, they provide a general sense of how green a city is, but zoom in, and you can see block by block exactly where trees are thriving — and where they aren’t.

The lab intends to grow the number of cities analyzed in the Treepedia in the coming months and even years. While its research is certainly beautiful, the primary motivation is far from aesthetic.

Trees have big environmental effects. They can minimize the heat island effect, whereby the dense cores of many cities are significantly warmer than the outlying areas. They also filter grimy city air. And while more evidence is needed, they may directly benefit our hearts and minds, too. Some studies suggest that people seem to show a natural affinity for nature and report feeling more calm around trees and the life they attract to them, like small animals and insects.

So Barcelona’s planned re-greening will be pretty, sure, but it could make the city healthier and safer. Other urban spaces, even those where structural tree-friendly changes seem impossible, are right to follow suit.

Will Genetically Modified Plants Save Us?

More like this
Innovation
Jan. 16, 2023
An ambitious plan could help repair one of California’s biggest ecological catastrophes
By The Conversation, Robert Glennon and Brent Haddad
Science
Jan. 19, 2023
Time-lapse shows shocking temperature changes between December and January
By Jennifer Walter
Innovation
Jan. 16, 2023
In a wild first, physicists used lasers to control lightning on a mountaintop
By Max G. Levy
LEARN SOMETHING NEW EVERY DAY.
Related Tags
Share: