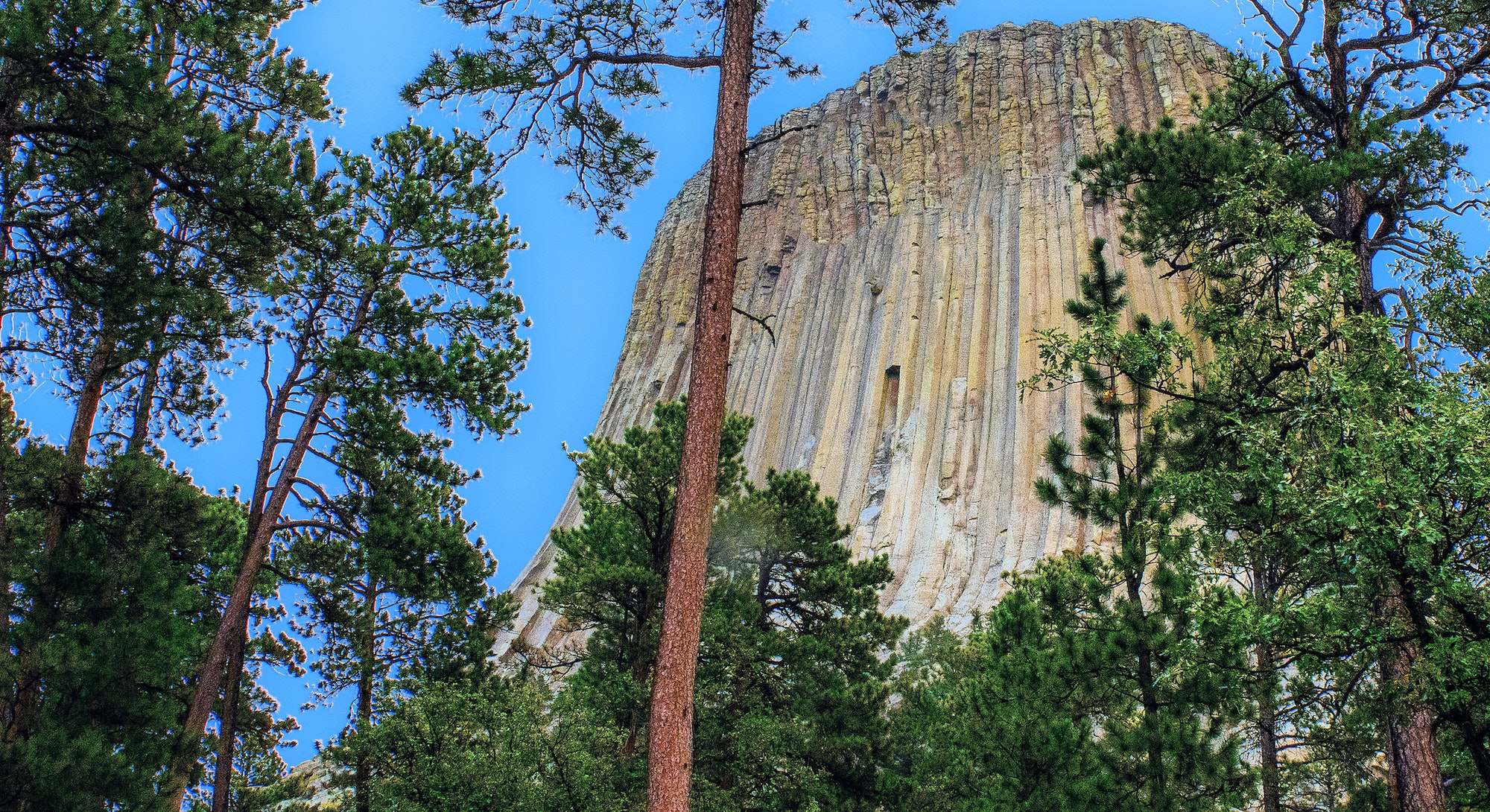 Last month, a YouTuber from Crimea commenced a conspiracy when they posted a video called “There are no forests on Flat Earth Wake Up.” In an instant, the worldview of thousands of people flipped upside down.

To be fair, these people already believed that the Earth is a flat disc, with the Arctic at the center and a NASA-guarded periphery. But now they believe this, too: What we call forests are just tiny remnants of an ancient and vibrant world, one that featured trees with trunks as wide as mountains that reached to the heavens.

It’s a bizarre, incredible idea that has taken the Flat Earthers by storm. More than 10,000 video responses have been posted to date, including summaries, reactions, roundtable discussions, and debunks.

Watch those videos, and you will hear people speak of how they approached the idea with skepticism, only to find that it began to resonate with them in a peculiar way. I have a confession to make: it resonated with me, too. Sure, the facts presented did nothing to sway my mind about the size of ancient trees, or the shape of the globe. But the feeling of mourning for a planet as it was before humans collectively took it for all its worth? Yeah, I get that.

No, really: Flat Earthers and other conspiracy theorists aren’t crazy. Their ideas are illogical, but they are built on a foundation of genuine scientific curiosity. Unfortunately, the investigation of that curiosity gets sidetracked by errors in thinking that are difficult to counteract. Add to the mix the ability to spread ideas and congregate virtually on the internet, and the result is an echo chamber where dissenting voices are easily ignored, and competing arguments only serve to deepen beliefs.

This notion that today’s forests are a poor version of their formers selves is catchy for the same reason as Flat Earth theory in general — the triumph of perceptual and emotional logic over intellectual vigor, in the context of declining trust in authority and an increasing sense of powerlessness and loss of control. I feel that, too.

Here’s how the “no forests” theory plays out: Sure, there are things that we call forests, but these are in reality just low-lying bushes, the impoverished remains of an ecologically rich world that held 40-mile high trees, with trunks two miles across. How do we know? They’ve left their stumps behind. Flat top mountains are remnants of behemoth trees, cut down by impossibly large machines. Jagged mountains are severed stumps of trees that fell or were knocked over in some great calamity — a nuclear war or great fire, perhaps.

All rock on Earth is not rock — it is merely the rubble left behind of this ancient, sacred forest, which was once completely alive. River valleys are old quarry mines, their steep cliffs carved out by enormous machines. Volcanoes are just heaps of industrial waste left behind from this ravaging of the flat Earth; the toxic chemicals inside them react, generating heat and fire, and the occasional explosion.

Each of these assertions is backed up with side-by-side photos of the geological feature and the thing the narrator imagines it to truly be. The images show amazing similarities. We are challenged to spot ten differences, but we can’t because there are only two: material and size, our narrator contends.

The Earth appears flat, and so it must be so. Devils Tower in Wyoming looks like the petrified stump of a giant tree, so it must be. After all, if you can’t trust your own eyes, what can you trust?

Of course, it’s not true that the mountains used to be trees, but from a wider perspective, the Flat Earthers aren’t completely wrong. We are living on an impoverished version of our planet, undone by our own hands. The forests that remain are shadows of their former selves. We’ve become so accustomed to the world as it is today, that it’s almost impossible to imagine the richness it once held.

There’s a map of an area close to where I live on Vancouver Island, off Canada’s Pacific Coast, that tells you where to go to see the old trees. One tree here, one tree there, a small patch of a few dozen somewhere else. In the top corner of the map an icon of an evergreen marks the spot where an ancient fir tree stands, nicknamed Big Lonely Doug.

I’ve visited some of these trees, and they do seem lonely. Trees, believe it or not, are social beings. They share information and resources through underground networks, and the biggest ones communicate farther and wider than the rest. Darwinian logic would suggest that they must compete for sunlight and nutrients, but there’s evidence of resource sharing and cooperation, even between species. The health of individuals depends on the health of ecosystems. When the surrounding forest was levelled, the last one standing felt it.

This has been the approach to preservation in these parts — cut it all down, except the one that is particularly awe-inspiring. Build a fence around it so your kids and grandkids will one day get a glimpse of the forest that once was. It’s the same with elephants and pandas — we spend enormous resources to keep them in cages so we can visit as tourists, even as we fail to preserve what’s left of the habitats they need to survive in the wild.

In barely more than a hundred years, Vancouver Island has gone from an ancient forested wilderness with individual trees over a thousand years old, to what is, in essence, an eight-million-acre tree farm. By the estimate of the Ancient Forest Alliance, three-quarters of the old growth forest on Vancouver Island and southwest British Columbia is gone. In the most productive river valleys, only nine percent of this ancient ecosystem remains. If you were to take one tree out of ten from these forests, you would have literally decimated it. These river valley landscapes have been decimated 20 times over.

In tree farms, humans operate large machines to chop down the trees in clearcut blocks, and they are trucked away to lumber yards and paper mills. The forests are not left to regenerate naturally. Instead, human tree planters come along with nursery-grown saplings, their roots entangled with fertilizer and fungicide-rich soil to speed their growth, and they insert them into the soil at regular intervals. Over the years, humans visit these plantations with chainsaws or herbicide sprays to push back competing species — which are defined not by a lack of ecological value but by a lack of profitability. Eighty or a hundred years later, when these trees are still in their adolescence, they will be razed again, and the cycle will start anew.

Just like industrial agriculture, industrial tree farming greatly impoverishes the environment where it takes place. Tree stands that are all the same age (and, often, all the same species) lack natural defence systems against pests, disease, and fire. Human interventions to keep our investments safe are typically ineffective or short-lived.

The Flat Earthers are wrong about the rock and the mountains, but they aren’t wrong to say we’re living on the dead corpse of a once-vibrant planet. When humans spread across the planet tens of thousands of years ago, massive die-offs followed, particularly of the large animals that are so critical to ecosystem health. Over the last 200 years, human destructiveness has picked up steam, with fossil fuel burning bringing unprecedented climate shifts. At the same time, the population is exploding, and more and more resources are pulled from the Earth to support our insatiable demand.

It’s possible that today’s Earth holds just a tenth of the abundance that it once did, contends J.B. MacKinnon in his book, The Once and Future World. The silver lining is that while the amount of life supported by this planet has fallen, its capacity to support life is unchanged. The return of nature doesn’t necessarily require the end of the human species, but it will require us to invite wilderness back in — not just to partitioned-off protected areas, but into all aspects of life.

Dinosaurs born after the asteroid impact didn’t know they were in the process of going extinct. The event itself was cataclysmic, but the die-off that followed probably took thousands of years, too long for any individual animal to notice that anything had changed at all. For humans, too, our perception is distorted by an amnesia for what has come before.

The dinosaurs (except for birds) were gone forever, but their absence was an opportunity for mammals to spread out and diversify, emerging from tiny mouse-like things over millions of years to the extraordinary diversity of Ice Age giants. The Pacific coastal forests, as they once were, are gone forever, too. Mountains will never be tree stumps, but ancient forests will rise again.