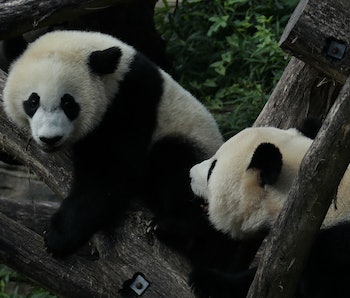 The headlines for wildlife were good this week. Panda populations jumped 17 percent in a decade, earning a status jump from “endangered” to “vulnerable.” Most populations of humpback whale were taken off the U.S. endangered species list, too.

Of course, the International Union for Conservation of Nature’s latest Red List of Threatened Species, released Sunday, wasn’t all sunshine and roses. The Eastern Gorilla (RIP Harambe) has gone from “endangered” to “critically endangered,” thanks to hunting and habitat loss.

And, while scattered conservation victories exist, those are minuscule battles in what seems like a fairly hopeless war. Research published Thursday found 10 percent of the world’s wilderness areas were lost in the past 20 years — these are the most remote, least human-friendly habitats on the planet, and we’re still encroaching on them at an unprecedented rate.

What this means — not just for pandas and humpbacks but for all the other creatures of this planet — is that these small rebounds will be short-lived. You can’t protect an animal species without growing and enriching its habitat. And on that measure, humanity continues to fail pretty miserably.

Sure, protected areas for pandas are on the rise, and this has been key in their recent success. But pandas are the literal poster children of conservation, and perhaps the planet’s most charismatic animal. Panda breeding programs cost millions and show astonishingly poor results. The pretense is also that the captive animals one day will be released to the wild, although they rarely are, and they tend not to survive long once they get there.

What about whales? They’re not doing too badly these days, but only in relative terms … because humans shamelessly hunted the large sea mammals almost to the brink of extinction. The International Whaling Commission banned the commercial humpback whale hunt in 1966, which did allow for a limited recovery. But oceans aren’t getting richer and more biodiverse, and human impacts — like strikes with ship propellers — are on the rise.

Humans like to protect animals by drawing lines on maps and restricting people from going there. It might work for some time, but it’s a shortsighted measure. You can’t tell humpback whales to stay out of shipping lanes, and small patches of bamboo forests will only support a few pandas.

And climate change, of course, respects no borders. A warming climate could destroy 35 percent of the panda’s bamboo habitat in 80 years. Ocean acidification threatens all sea life that depends on making shells, including krill — a primary food source for the humpback whale.

A species-by-species approach to conservation ignores the significant and global impacts humans are making on Earth’s ecology. Creating more protected areas might be better than nothing, but a real change would involve taking a very big step back and working to scale back human impacts on the environment in every aspect of our lives.