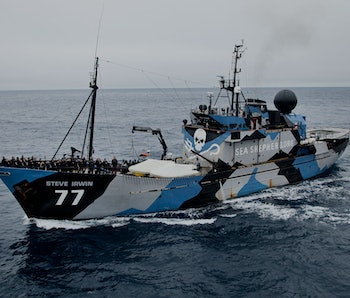 The Sea Shepherd vessel Steve Irwin headed out from Melbourne, Australia this week, hot on the trail of the Japanese whaling fleet that intends to kill 333 minke whales in the Antarctic ocean, despite an order from the International Court of Justice to end the hunt.

“There are people from all over the world, including Japan, on our ships, not getting paid, and yet they just have this common passion to give the planet some sort of hope that we can maintain our life support systems for humanity — and just a love of nature and a love of the whales,” Jeff Hansen, managing director for Sea Shepherd Australia, tells Inverse.

After stopping at Sea Shepherd Australia headquarters in Fremantle, Western Australia, the 175-foot boat will head south with 30-35 crew members on board to do what it always does: save as many whales as possible.

Here’s what they’re up against. The hub of the Japanese fleet is a 8,000-ton factory ship called the Nisshin Maru, weighing in at about eight times the Steve Irwin, with a crew of about 120. Then there are three harpoon ships that scatter and hunt the whales, turning them over to the factory ship for processing once they’ve landed two or three. Each harpoon ship is about the same size as the Steve Irwin, Hansen explains.

In other years, Sea Shepherd has sent up to four vessels to interfere with the Japanese whale hunt, he says. But they’ve also sent just one in some years, and still managed to save hundreds of whales. “It will be harder with just one vessel, but we’ll always do the best we can with the resources and the funding that we’ve got,” says Hansen.

How do they do it? By physically getting in the way of the whaling fleet’s ability to operate. It’s high stakes drama, real conflict, and actual collisions, with the Japanese vessels retaliating with water cannons and attempts to tangle their propeller in chains.

After 10 years of campaigns against the whaling, Sea Shepherd has learned that one of the most effective interventions is to physically come between the harpoon boat and the factory boat, so that dead whales cannot be offloaded, says Hansen, who has been on two of the missions himself. “If they can’t load the dead whales, they can’t kill the live ones.”

By Sea Shepherd’s count, these tactics have saved more than 5,000 whales. The whalers will sometimes return home with just a fraction of their quota. This year’s quota is a just a third of what it has been in the past, which will make it harder for Sea Shepherd to prevent them from achieving it before the whales begin their migration north in the spring.

Sea Shepherd’s fleet may be down to one this year, but the organization is counting on some new international support. Hansen said he’s expecting patrol vessels from Britain and New Zealand to come out as observers, and that an Australian vessel may join, too. This has happened only once before, in 2008, when an Australian ship came down to collect evidence that was eventually used in the International Court of Justice trial against the whalers.

With that court ruling, Hansen says he hopes governments will make more of an effort to intervene. “If we know a crime is about to be taking place, and we do nothing about it, then really those countries are aiding and abetting in a criminal operation.”

For Hansen, who has spent a considerable amount of time in the extreme south, it is also personal. It feels, in an immediate way, like this is his watch.

“I remember one morning I got up to the bridge and it was 3:30 in the morning, and it was bright blue daylight, because the sun was always out, and there were about 20-odd icebergs, some were nine, 10 kilometres long and 30, 40 metres high. And in amongst this ancient world of ice there was minke whales and fin whales and humpback whales. And then there were big chunks of ice with Adelie penguins on them, and then pods of orcas coming through, really showing themselves as the bad boys or the wolves of the sea,” says Hansen. “It makes it very easy to do what you can to protect it.”