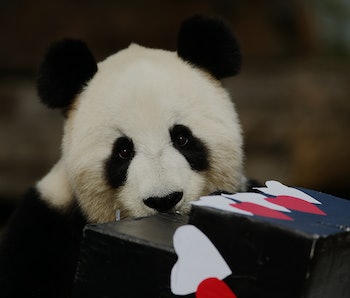 It looks like all those cute baby panda births are finally making an impact on the future of the species. After 32 years on the International Union for Conservation of Nature’s endangered species list, the cuddly creatures have finally been upgraded to “vulnerable” status.

The population of giant pandas has increased 17 percent in the past decade, with two-thirds of the population residing in China’s panda reserves. This is a huge reversal from 2009 predictions that warned the species could be extinct in the next three generations.

Conservation efforts began in the 1950s, but it wasn’t until China passed laws in the 1990s to remove humans and hunters from panda’s natural habitats — and stop focusing on caging — that the species saw a rise in population.

Because giant pandas are notoriously resistant to mating in captivity, the development of breeding through artificial insemination also spurred along a new generation of pandas. Births of giant panda cubs quickly become international news events. Two days ago the Atlanta Zoo announced the first set of giant panda cubs born in the U.S. in 2016.

However, programs to breed pandas have yet to prove successful at the ultimate goal for the conservation of the species — releasing the animals back into the wild. The first zoo-born giant panda died after being released in 2007 after wild pandas attacked him.

While decades of Chinese conservation efforts have finally made an impact, the good news may be short-lived. Pandas survive on a diet that consists of 99 percent bamboo, but climate change is expected to destroy more than 35 percent of China’s bamboo habitats in the next 80 years.

China, which still has a long way to go on reducing its carbon emissions and doing its part to slow down global warming, is going to have to step up its environmental policies in order to protect its cherished national icon. But for now, panda fans can rejoice at the small victory.

More like this
Science
18 hours ago
Are you ready for extreme snow?
By The Conversation and Michael A. Rawlins
Science
November 23, 2022
Can this bird self-medicate with plants to kill parasites? Some researchers think so
By Jennifer Walter
Science
November 17, 2022
Scientists suspect microscopic life may be blooming under Antarctic sea ice
By Tara Yarlagadda
Related Tags
Share: