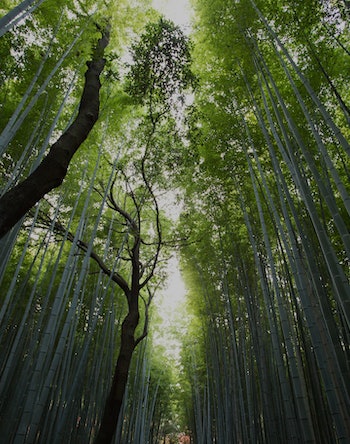 Martin Bunzl is an optimistic pessimist. The Rutgers University professor, who studies the philosophy of science and climate change policy, doesn’t hold out hope that mankind will come up with a way to pull back emissions quickly enough to avoid disaster. But he does believe that a technology capable of pulling more carbon dioxide out of the air could turn things around. He’s not alone on this theoretical limb, but he is one of only a few public intellectuals suggesting that trees might be the once and future answer to our problems.

“Some kind of negative emissions program is inevitably going to be in our future if we want to proceed cautiously,” Bunzl says.

Bunzl spoke Tuesday at a panel discussion hosted by the American Institute of Aeronautics and Astronautics on the subject of the role of aerospace industries in potential geoengineering projects, especially solar radiation management schemes that would seek to block out some of the sun’s light in order to cool the planet.

But he’s skeptical that tinkering with the sun will ever seem like a good enough idea to actually attempt. While it would cool the planet, it won’t undo the impacts of greenhouse gas emissions, and in fact would inject a new set of risks and uncertainties into the climate system. The social and political barriers such a proposal would have to overcome are nearly inconceivable. Solar radiation management, at best, buys us some time by keeping temperatures a little lower while we figure out how to get the carbon out of the air permanently.

“It’s a plausible stop-gap measure, but it’s a plausible stop-gap measure that faces insurmountable problems with regard to a number of different areas,” says Bunzl. “And by the time we settle the issue, or come to a circumstance in which we think it might be necessary, we will be long, long beyond the area in which we ought to become serious about the long-term program of carbon dioxide removal.”

Bunzl also questions the idea that pulling carbon out of the air with chemical and mechanical systems will somehow one day become cheap enough to make sense on a massive scale. It’s fundamentally easier to put carbon dioxide out into the atmosphere than to call it back. Imagine all the resources and infrastructure that have gone into fossil fuel burning in human history — it would very likely take operations of that magnitude or larger to clean up the mess.

Here’s something that might just work, though: Using the techniques of modern genetic engineering, including CRISPR, to modify global plants so they take up carbon dioxide from the air more efficiently. “This is a seductively interesting option, because you get a self-replicating system which will continue once the changes propagate through living organisms to improve carbon dioxide uptake,” says Bunzl.

Biological systems are already many times more efficient than chemical systems at scrubbing CO2 from air, and there’s reason to believe they could get even better. A team of biochemists in Germany recently developed a new molecular transformation chain that, at least in the lab, is about 25 percent more efficient than the enzyme chain used in photosynthesis. A living system genetically engineered to use this pathway might metabolize carbon dioxide two or three times as fast as it otherwise would, the researchers predict, although this has not been tried and outcomes are uncertain.

But it’s theoretically possible that, if plants genetically modified in this way spread across the Earth, they would be not only enormously useful in pulling carbon from the air for biofuel, but also helpful for carbon capture and storage. Biomass produced by the plants might be sequestered long term either through extensive deep root systems, or through some sort of sequestration project.

This, of course, would be risky in a lot of the same ways that other geoengineering schemes are — namely, unintended and unpredictable consequences that may negatively impact ecosystems and communities. But the risks of trying may end up being far more manageable than the risks of doing nothing, a fact that the U.S. government acknowledged formally for the first time this week.

But how do you gain social approval for a program of mass dispersal of genetically modified organisms that cannot be called back once they are out in the world, and will certainly displace non-modified plants and crops?

“If you think there are problems with genetically modified organisms in the popular mind in terms of food consumption, imagine the kind of dissatisfaction that would have to be overcome in order to implement this at a broad base level,” says Bunzl.

M.I.T. professor Kevin Esvelt has one idea for how it may be done. He’s not working on getting plants to take up more carbon, but on genetically engineering immunity to tick-born bacteria into white-footed mice in a bold plan eradicate Lyme disease. But the social and political hurdles are similar, and he has an equally bold plan to overcome them: change the nature of science itself.

“I want to drag my entire field kicking and screaming into the open,” he told the New Yorker. The key, he says, is absolute transparency and communication, and it’s a philosophy he’s putting into action through regular community meetings with the people of Nantucket Island, Massachusetts, where he hopes to one day release his genetically modified mice in the first field experiment.

That day is years away, but Esvelt is betting that his only hope for ultimately being able to do this work is in engaging the public right through the scientific process, so that they feel some ownership over the project and its potential risks and benefits.

This same logic may apply to super-plants designed to consume more carbon, though on a much grander scale. It’s one thing to convince an island of 10,000 people, already terrified of Lyme disease, to accept the risks that might come with releasing these genetically modified mice into their environment. It will be quite another to come to any sort of global consensus on the dissemination of an army of amped up photosynthesizers across the planet.

That doesn’t mean it won’t be worth a shot. Following the precautionary principle, Bunzl and Esvelt agree, is a very bad option.