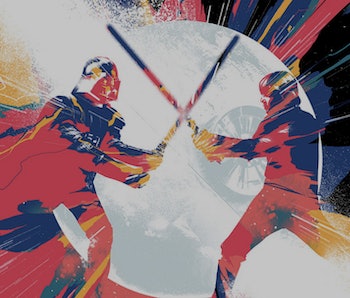 That forceful family of chosen ones may continue to walk the skies and the stars well after Star Wars: Episode IX hits theaters in 2019. A new rumor suggests a fourth Star Wars trilogy beyond the conclusion of the sequel trilogy (which began with The Force Awakens) is completely possible.

On Thursday Star Wars News Net released new information about future Star Wars films post 2019. This information comes from their alleged “source” and is earmarked with the suspicious disclaimer “that every quote I make in regards to the source is significantly paraphrased from what he told me.” Meaning, the following rumors could be just as reliable as Obi-Wan saying Darth Vader killed Anakin, and the game of telephone happening here could make all of this wildly inaccurate. Still, this Star Wars version of [Deep Throat](https://en.wikipedia.org/wiki/DeepThroat(Watergate)) did give the internet the previous rumor about three old-school planets turning up in The Last Jedi, so at the very least there’s some fun speculation with these rumors.

The report prominently claims that the long-rumored Obi-Wan Kenobi standalone movie starring Ewan McGregor will actually happen and even says an “announcement at Orlando” is very possible. This refers to the upcoming Star Wars Celebration in Orlando, Florida, which starts this year on April 13. Because there is an untitled Star Wars anthology film scheduled for 2019, it’s possible this could be that Obi-Wan movie. If true, all this focus on Obi-Wan probably only lends more credence to the idea that Rey is somehow related to the famous Jedi.

After a lot of speculation and talk about Star Wars TV shows and Boba Fett, the other big rumor is the idea that a sequel trilogy, beyond Episode IX, will happen sometime in the far future. According to the report: “Since Star Wars is a generational thing, there will be a gap between the sequel trilogy’s end and the new trilogy’s arrival.”

Running contrary to the rumor that Episode IX would end the Skywalker saga films forever, a fourth trilogy seems almost unimaginable. Plus, when would it even come out? 2022? Or is the story of a galaxy far, far away going to pick up again in 2030? As Yoda told us, the future is always in motion.

The Last Jedi hits theaters on December 15. The Star Wars Celebration in Orlando — where big announcements about Obi-Wan and TV shows may or may not happen — starts on April 13.