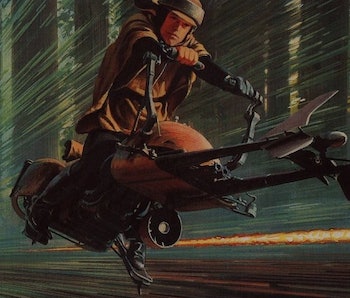 Traveling through hyperspace may require precise calculations, some of which can lead a starship back to a planet they’ve already visited. And if fans are very lucky, Star Wars: The Last Jedi will return to not one, but two previously glimpsed planets and one very special moon.

According to a rumor on the fan site Star Wars News.Net, the volcanic planet Mustafar, the desert planet Tatooine, and the forest moon of Endor could all make appearances in The Last Jedi and/or its sequel, Star Wars: Episode IX. If true, this would be the first new live-action Star Wars movie which will return to Tatooine since Revenge of the Sith in 2005. Meanwhile, the home of the adorable Ewoks, the moon of Endor, hasn’t been in a Star Wars movie since 1985’s made-for-TV movie Ewoks: Battle for Endor. Mustafar, the infamous lava planet from Revenge of the Sith, showed up in Rogue One last year, where we learned Darth Vader lived in a creepy castle.

Though The Force Awakens may have revisited many familiar motifs from older Star Wars movies, there weren’t actually any old planets in the movie. Jakku looked like Tatooine, and the Resistance base on D’Qar felt very Yavin IV, but these were supposed to be new places. If Episode VIII and Episode IX do return to these familiar planets, it is suggestive for one specific reason. As Star Wars News.Net points out, Darth Vader is connected to all three of these places.

As Anakin, Vader grew up on Tatooine and later lived on Mustafar, and after his death, he was cremated (by his son Luke) on Endor. If Kylo Ren is continuing to go on his fanboy quest to track down everything having to do with his grandfather, it stands to reason all three of these locations could fill him with Dark side nostalgia. The report on Star Wars News.Net also suggests that Tatooine may already have been glimpsed in Rey’s Force vision when she sees Luke Skywalker sadly place his robot hand on R2-D2. Would Luke have really built a Jedi training academy on Tatooine? It’s an interesting thought, and it makes a certain amount of sense.

Of course, it’s also possible that none of this is true, and that The Last Jedi will only take place on the newer planets in the Star Wars mythos. But if Endor does return, and Ewoks somehow don’t make an appearance, exactly half of all fans will be relieved, while the other half will be outraged.