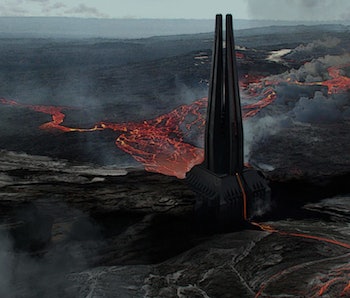 Darth Vader’s castle on Mustafar isn’t just in a significant location because that’s where he killed his wife, Padmé Amidala (and, uh, lost all his limbs). Doug Chiang, Lucasfilm concept artist and Rogue One co-production designer, revealed in a recent interview that Vader’s castle actually sits on the “foundation of an ancient structure.” Part of that contains a cave with a lake of lava where Vader goes to meditate with the help of his “tuning fork” castle.

In an interview with StarWars.com regarding the design behind Rogue One, Chiang said that creating Vader’s castle was partly inspired by concept art from original Star Wars trilogy concept artist Ralph McQuarrie, “where Luke actually visits Vader in this underground lava cave. I always thought that was such a compelling image, because you have this lava lake inside this cave and there was Vader’s throne.” Building upon that, the team decided that the lava dam for the castle was going to be a much older structure than the tower, which Vader would have been responsible for. The original building harnessed power from the lava — maybe acting as an energy source of some sort, but the “tuning fork” tower was all Vader.

“One of the things we landed on early was this idea of a tuning fork, a twin tower kind of look. And it was really interesting, because then that started to give Gareth a lot of ideas like, ‘Well, maybe the structure is built this way because it is like a tuning fork. It’s tuning the dark side in terms of the energy.’ And then, we actually carried that even further to Jedha. The Jedha temple, the tower there, mirrors this, but on the good side. So when you see the film, you can start to see, ‘Okay, Jedha had its own tower, which was configured like a tuning tower. Vader’s tower, Vader’s castle, had the same thing, but it was made in black, whereas Jedha was white.’”

Darth’s attempts to harness the Dark Side even more might explain why he’s in full ass kicking mode at the end of Rogue One when he takes on the Rebels and wins by a longshot and a lightsaber. And this confirmation of the castle’s innate powers might further confirm the fan theory that Vader’s castle might be the one thing that ties Rogue One to Episode VIII. If Kylo Ren knows that his grandfather’s castle will help him grow closer to the Dark Side, then that’s all the more reason to go there.

The world will have to wait for answers, though, until Episode VIII arrives in theaters December 15, 2017.