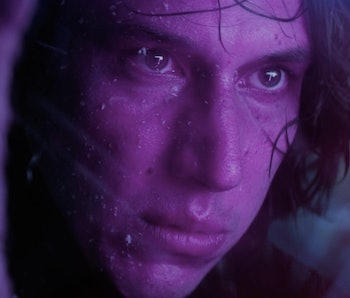 Kylo Ren is so obsessed with Darth Vader he may even start creepily wearing his dead grandfather’s actual clothes. Specifically: Kylo’s getting a Sith cape, and it just might be legit vintage.

A new rumor from Making Star Wars suggests Kylo Ren’s costume will be a little different for Star Wars: Episode VIII and that his new cape “is said to be like the one Darth Vader wears in The Empire Strikes Back / Return of the Jedi.” This report is by no means official or confirmed, but it does make sense that as Kylo Ren continues to put his Ben Solo identity more and more in the rear-view mirror, he’d continue to ape the aesthetics of the grandfather he never knew: Darth Vader.

And the most fucked up part is, he might not just be getting a cape like Vader’s, it might be Vader’s cape. As the Making Star Wars report clarifies: “It is not entirely clear if this cape is one Kylo made to resemble that of his grandfathers or if he actually procured one of Darth Vader’s capes that probably fell into the hands of collectors in the Star Wars galaxy.”

Those “collectors” they’re referring to are probably the Acolytes of the Beyond, a group of Vader groupies who like to buy stuff connected to the fallen Sith Lord after the Battle of Endor. So, the only question here isn’t whether Kylo Ren would repurpose one of Vader’s capes as his own, because we totally know he would if he could. Just picture Finn wearing a cool black cape, and Kylo’s reaction. “That CAPE! It belongs to ME!”

In The Force Awakens Kylo Ren doesn’t have a cape, but instead sort of wears a cloak off-of the shoulder, which is, you know, fashionable, but not as overtly evil as a full-on black cape.

Obviously, tidbits about costumes in an upcoming Star Wars film might end up being totally untrue. Back during the rumor mill phase for Episode III, George Lucas even mentioned details about Darth Vader’s costume that proved to be wrong. Still, because the idea of rocking Vader’s actual cape is so perfectly in-line with what we already know about Kylo Ren’s personality, we’re going to say that the Force is very strong with this particular rumor.