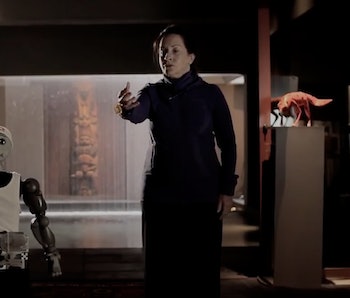 When we picture robots providing care, we tend to assume it must be physical care. Human illness, however, is hardly constrained to the body. Thus computer scientist Maja Matarić is developing socially assistive robots that focus on the psychological.

Bandit, a computerized rolling torso with a gingerbread man-like face, can help with physical therapy by demonstrating the correct movements and performing them right alongside the patient. But it also goes into the realm of emotional support, creativity, and companionship.

“Hey, let’s do something a little more fun,” Bandit tells the man it’s working with at Matarić’s University of Southern California laboratory. “Let’s play the imitation game. Move your arms. Show me what do to.”

The man begins to lead, stretching his arms. And Bandit mirrors him.

“I’m having fun,” Bandit says in a cheery voice. “I can play this game all day long.”

For people with debilitating conditions — physical trauma to Alzheimer’s to autism — Matarić says that socially responsive robots are uniquely positioned to supplement human caregiving. Their automated nature lends itself to encouraging necessary, repetitive tasks. Coupled with their physical presence, they could prove a vital resource in helping patients manage or recover from their respective conditions. A paper describing her recent research was published Wednesday in the journal Science Robotics.

“Perhaps one day a robot like me may help you or someone you know,” Bandit says.

Fifteen years ago, Matarić created the field of socially assistive robotics (SAR). Its goal is to design robots that are intuitive, supportive, and ultimately able to help people without doing physical work.

“So what can [assistive robots] do?” Matarić tells Inverse. “All kinds of other things. Increasing situational awareness, reminding people of things … getting them to do repetitive daily tasks that will help them get better and stay better. You don’t see that being addressed even though it’s very badly needed.”

We know that screen-based contact can be effective, but not as effective as actual physical presence. Our brains engage better when we interact with the real thing, and the real thing doesn’t have to be a person. It can be an animal; it can be a robot.

SAR is distinct from simple social robotics in that it aims to influence behavior. It’s the difference between something that reminds a patient to exercise or take a pill or attend therapy and something that persuades them to do those things when they don’t want to.

“People say, ‘Oh, why don’t you use an app for that?’” Matarić says. “Because there are literally a gazillion and almost none are effective. Our brains are wired to interact with other physical creatures. And then once you’ve got this robot it — what does it look like? And how does it behave? That all creates expectations on the part of the user.”

People don’t feel as embarrassed in front of machines as they do with human caretakers, or as guilty about asking for help. We’re better able to process assistive robots for what they are when they look more classically robotic. If a robot looks too realistic — too human — users tend to perceive it as being smart.

To make patients comfortable, it’s imperative that the robots pick up on social cues, reading tone and body language and reacting neither too quickly nor too slowly. This is an ongoing challenge in the field, which is why Matarić wants future SAR developers to collaborate with experts in social and psychological sciences, as well as with ones for conditions like autism.

“All robots are on the autism spectrum,” Matarić says. “They have no idea how to react to social cues appropriately.”

Of course, for a child with autism, that may be an asset. Matarić, who has worked with many different patient populations over the last 15 years, says that beyond what individual specifications people may need to accommodate their respective disabilities, the common thread is always the humanity — the universal desire for dignity, positive feedback, and measurable progress that transcends age or gender or disease.

Matarić predicts that the adoption of socially assistive robots will vary by specialty. Companies looking to introduce them to hospital settings will evolve them at a different pace than those suited for special-needs classrooms or Alzheimer’s homes. She figures the home market will be the most consumer-driven, and so the most profitable, which means that use might take off faster there, even though it’s arguably the most difficult to do well.

In the meantime, Matarić says people who view her work as part of a robots-replacing-people narrative are missing the nuances of these situations. Socially assistive robots can supplement caregivers who are overtaxed, and they can provide a structure and reliability that humans cannot. But there are some things they’ll never do.

“It doesn’t mean we’re ever looking at replacing human care with machines,” she says. “They’re never going to be like people — and that should never be the goal.”