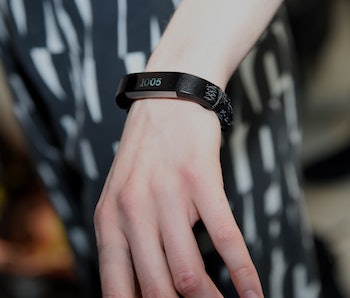 If you’re one of those fitness tracker devotees who walk an extra block just to rack up steps, here’s some helpful advice: Don’t.

A study published in the latest edition of JAMA found that over the course of two years, overweight people who used fitness trackers didn’t lose any more weight than did those who soldiered on without them.

“Among young adults with a BMI between 25 and less than 40, the addition of a wearable technology device to a standard behavioral intervention resulted in less weight loss over 24 months,” the JAMA study stated. “Devices that monitor and provide feedback on physical activity may not offer an advantage over standard behavioral weight loss approaches.”

Read: fitness trackers are basically fancy pieces of metal that do nothing for you. Oof.

Since wearable fitness trackers first came into vogue around five years ago, there have been a number of accompanying inspirational stories and very vocal devotees who swear that their Fitbit or Jawbone or what have you was the key to their weight-loss success.

But recently, the buzz-killing voice of science has been growing louder, suggesting that fitness gadgets are ultimately kind of useless. People who use wearable fitness devices actually come to find exercise more stressful and daunting — and, therefore, less fun. As humans, the less fun an activity, the less we’ll want to do it, so fitness trackers actually did the very opposite of what they were supposed to be doing in many cases.

A major obstacle in the efficacy of any fitness tracker has always been that we all have short attention spans and enjoy moving on to the next shiny thing. A study of what happened when folks just straight-up stopped using their tracking devices — “lapsing” — suggested that these guys just taunt us of our past failures.

A minor bright spot for fitness trackers from two years ago: The Berkeley Science Review found that the data Fitbits measure are pretty accurate. But there’s a downside again: It’s not really of any help to a person who has lost interest in using it. Time for us to sprawl on the couch.