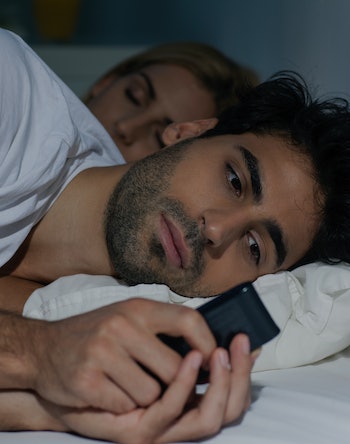 The economic forces pushing service industries toward crowd-sourced, internet-facilitated business models have not overlooked psychiatry. The transition of therapy from the brown, leather couch to the iPhone has begun. What remains to be seen, though, is with what level of efficacy internet therapy can replace what we think of as the real thing.

Clinicians are moving increasingly toward supplementing their practices with apps. The clinical success of this effort is difficult to quantify, as things in psychology often are. But the growing popularity of pay-per-play live-chat platforms is a powerful trend, one that aims to level the playing field for those who need mental healthcare and might not otherwise have access to it. It is also a trend that may be capitalizing on what might initially seem like a weakness, the lack of real human contact, to create something altogether new.

Earlier this year, Walgreens partnered with Mental Health America to create diagnostic and intervention-geared tools to fight mental illness — essentially creating a massive practice with franchised branches in low-income neighborhoods. That is a big deal. Therapy is now not just online, but also mobile. If you’re curious about what it might be like to essentially have a therapist in your pocket — if you’ve ever been unable to receive care due to the high cost, or because you live in a therapy-desert, or felt too ashamed to seek help — you might try something like Talkspace.

At 1,000 therapists and more than 300,000 users, Talkspace is one of the most intriguing manifestations of the trend toward what might be termed “fast therapy” — or, as author Susan Shapiro dubbed it, “Speed Shrinking.”

“Messaging means patients can stay anonymous,” said Roni Frank, Co-Founder and Head of clinical services at Talkspace. “They don’t even have to give their real name on Talkspace. That makes people feel more safe and less judged when they text…. It creates a safe space and a healthy level of distance, and it normalizes the experience.”

She believes this degree of remove prompts patients to open up more quickly than they would in a traditional therapy setting.

I tried Talkspace for a little more than month. The setup does indeed feel more like Facetiming a friend than it does a medical appointment, though of course whether a patient finds that appealing will come down to individual temperament. The app, which is currently available for the Android or iPhone, prompts users to participate in a free consultation that matches them with therapists who specialize in particular conditions, traumas, or personal history. Users can also request therapists of their preferred age range or gender. There’s no time limit to how long this process takes; there’s no initial financial commitment, either.

My designated therapist met with me from her couch in Nashville, sometimes accompanied by her dog. (Frank confirmed that as of September 1, Talkspace will only match you with a therapist who lives in the same state you do, in accordance with licensing guidelines.) This was the first time I’d ever had extended, intimate conversations with someone I’d never met in person, but that wasn’t a huge shock; people talk to people they’ve never met all the time.

I do think there’s something to Frank’s belief that the distance, which renders the experience as more of an abstraction than a reality, makes people more inclined to open up. It’s sort of like how you don’t care about getting dressed in front of strangers at the gym, but would feel very weird in front of, say, your mom. Sometimes it’s easier to talk to someone if they don’t seem real. We also know that in many cases, we can get at least some of the same benefits from experiencing something digitally as we do when we experience it in person.

Which isn’t to say that Frank is devoted to the idea of digital spaces. The traditional therapy model remains at the core of the Talkspace business for a simple reason: A decade ago, Frank’s marriage was falling apart. A last-ditch effort at couples therapy brought them back from the edge.

“It literally saved our marriage, Frank said. “As a result, I became very passionate about psychology.” She left her career as a software developer to study psychology and become a therapist. It was while working toward her Master’s degree that she began to realize how broken the nation’s mental healthcare system actually was, and how fragmented care access is to people in crisis.

I’ve had after-hours emergency services lines hang up on me, and I’ve had hospitals keep me overnight, but refuse to let me speak to anyone about my medication because they assumed I was just high. I’ve been ghosted by doctors without explanation. I am far from alone in these experiences. If physical healthcare is complicated, mental healthcare is so fraught as to be basically indescribable. Frank gets that; she’s a true believer. She saw a problem, and she saw an opportunity to help fix it.

Frank and her husband co-founded Talkspace in 2012, identifying what they perceived to be the three largest barriers to quality mental healthcare: cost, stigma, and access.

There’s no commute; no waiting rooms. The implications for patients who struggle to show up to traditional therapy appointments — due to anything from agoraphobia to social anxiety to insufficient insurance to a shift-work schedule — are considerable. You can even buy someone a Talkspace e-gift card, which seems a bit gimmicky, but has probably proved useful at some point.

Talkspace was initially just a texting platform, but it’s released a steady stream of features since its debut. You can now send video messages to your therapist as part of the messaging program. Six months ago, it launched a live video feature. You’d think this would be the most clinically and commercially compelling, but it’s interesting to note that Talkspace’s most basic package - unlimited texting, no video, billed as $128 per month - is also its most popular. Clearly, there’s a market for a treatment that is more quick and dirty.

The biggest advantage to something like Talkspace is its immediacy. The platform guarantees that whenever you text, your therapist will respond in less than one day; mine usually responded within hours. I’m not sure this kind of tool would be enough for someone with a severe and disabling pathology, someone in the middle of a crisis, but I do believe that there’s an enormous benefit to knowing that someone will respond to you at all times, that you have a number to use if you need it.

You can’t usually make a last-minute appointment to see your doctor at the moment you truly need them, but you could chat with your Talkspace therapist at work, from the bathroom, in the middle of the night - not all doctors will do that for you, certainly not for the price Talkspace is charging.

Talkspace accomplishes all this by operating with basically no overhead. It needs no offices, no private practice facilities. It pays its therapists less money per client than they’d make traditionally, which is just fine with them because they have full control over their own schedules, and can conduct a session at home in their pajamas as easily as a patient can.

I asked Frank if potential clients weren’t put off by the potential danger of putting so much sensitive material online, all in one place, but she believes people are sufficiently acclimated, by now, to the idea of having their personal details on the internet.

“We’re investing tons of effort on security and encryption,” Frank said. “That’s what keeps us up at night, making sure the data is completely private and secure.”

So far, they haven’t had any breaches.

Part of the stigma around mental healthcare means that its service is still perceived as an option, not critical. An indulgence, rather than a treatment people need in order to remain alive. The high cost and misleading cultural perception that everyone is in therapy for low-grade problems also gives the impression that therapy is a luxury, despite the fact that mental illness is determined by a combination of genetic factors and environment, not weakness of character. Talkspace did not feel like a luxury; it felt like a tool. Giving people the means to seek help in private might not cut down on stigma in and of itself, but it will help the people who need help, and ultimately will broaden the dialogue anyway, just by virtue of more people signing up every day.