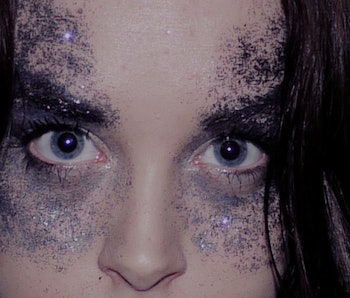 On Ash Wednesday, March 1, a number of churches and Christian groups in the U.S. blended purple glitter into the blessed ashes before applying them to the foreheads of Christians to mark the beginning of Lent.

The use of glitter was intended as a display of solidarity with the LGBTQ community at a time when bathroom-related laws threaten transgender rights. Recently, the Trump administration reversed Title IX guidance providing protections for transgender public school students that allowed them to use bathrooms and facilities corresponding with their gender identity.

Fourteen states have introduced legislation that would impose restrictions on transgender people using public restrooms. Some states, as well as the Trump administration, are also considering laws that would allow businesses and organizations to refuse services to LGBTQ people based on religious objections.

In this context, Rev. Marian Edmonds-Allen, executive director of Parity, a faith-based New York City organization that organized the Glitter Ash Wednesday events, explained that the events were meant to be acts of love and resistance at a time when members of the LGBTQ community could feel especially vulnerable to discrimination.

As a sociologist and social movements scholar, I have studied the emergence of innovative tactics in the movement for LGBTQ rights in the United States.

So, what is the history of using glitter as a method of expressing support for the rights of LGBTQ Americans? And what makes glitter an effective tool of resistance?

The tactic was initially conceived by Minnesota activist Nick Espinosa, who yelled “feel the rainbow” as he doused conservative talk show host Newt Gingrich with glitter at a book signing event in 2011.

This became a popular method of highlighting LGBTQ rights in the months preceding the 2012 election.

Activists intended glitter bombings to be harmless, visually spectacular protests that would capture media attention and appear playful. Opponents of the tactic, however, debated whether it counted as criminal assault and if it posed a health risk to targets.

Minnesota activists who called themselves “the glitterati” also highlighted the anti-LGBTQ policies of organizations with glitter bombs. In a particularly creative protest, activists dropped bags of confetti from the Minnesota State Fair sky ride attraction onto the state fair booth of conservative organizations of Minnesota.

Another group of activists threw glitter in the lobby of the Bachmann Clinic in Minnesota, which was known for engaging in the controversial and scientifically disproven practice of “reparative therapy,” which is intended to “convert” members of the LGBTQ community to heterosexual or gender normative behavior through prayer.

As I detail in my research, glitter bombings of individual political candidates were a short-lived tactic that was used for about a year between the spring of 2011 and the summer of 2012. However, supporters of LGBTQ rights have continued to use glitter at larger protest events.

In 2012, for example, the Minnesota “glitterati” returned to the Bachmann Clinic for a flash mob-style dance to Lady Gaga’s iconic song “Born this Way,” during which more than 30 protesters “baptized” an effigy of clinic director Marcus Bachmann with glitter, leaving an enduring dusting of rainbow sparkles in the clinic’s parking lot.

More recently, in the days before the 2017 inauguration, activists organized a “queer dance party” in front of the temporary home of Vice President Mike Pence in a residential neighborhood in Washington, D.C. Billed by organizers as “a glitter-filled, rainbow-filled extravaganza,” the protest included glitter in all forms – sparkling body paint, bedazzled signs, sequinned costumes, and biodegradable confetti. Other glitter-laden dance parties took place outside an inauguration entrance and in front of Trump properties in cities across the U.S.

The question is, why do LGBTQ rights activists use glitter?

Think of glitter as an accessory that adds social meaning, along with extra sparkle and flair, to the traditional repertoire of social movement tactics.

In my research on the emergence of glitter bombing as a social movement tactic, I found that the use of glitter to express support for LGBTQ rights is especially effective for several interrelated reasons.

First, glitter resonates with cultural conceptions of the LGBTQ community. The imagery of glitter is tied to dance clubs, drag queens, and the colorful history of using visual culture and fashion as methods of making LGBTQ communities visible.

As the Glitter Ash Wednesday website reads, “Glitter is an inextricable element of queer history.” Broadly, this kind of resonance allows movements to connect with members of the public and mobilize supporters.

Secondly, the celebratory nature of glitter makes it a particularly poignant counterpoint to the difficult political and social issues of anti-LGBTQ violence and discrimination. Whether used in glitter bombs against political leaders, showered over dancing protesters, or used in Ash Wednesday events, glitter is fun, fabulous, and playful, as long as it is used in a nonviolent way.

The use of upbeat imagery and performance to express political dissent adopts an approach that social movement scholars call “tactical frivolity.” This strategy attracts public attention in a way that confrontation may not. It can help mobilize people who might not participate in more contentious forms of protest.

Glitter is serious business for queer people. Glitter is how we have long made ourselves visible, even though becoming visible puts us at risk.

Lastly, glitter is an equal opportunity tactic. It is inexpensive, easy to obtain and easy to use. The most effective tactics are both easily accessible and widely applicable.

At the same time, it can be added in to other forms of political expression across a variety of contexts.

Such use of glitter, however, can also lead to serious objections.

Although Mitt Romney joked about the first glitter bombing, calling it confetti to celebrate his victory in the Florida primary elections, the second activist to use the tactic against Romney was detained by the Secret Service and later faced misdemeanor charges.

In the case of the more recent Glitter Ash Wednesday events, some conservative Christians felt that it was sacrilegious to mix glitter in with blessed ashes. Others saw the events as a frivolous alteration of a somber religious tradition.

Keeping Up With the Protest Tradition

Nonetheless, creative and confrontational protest tactics have been a central element of the movement for LGBTQ rights in the U.S.

In 1977, for example, celebrity singer and former Miss Oklahoma beauty pageant winner, Anita Bryant, was “pied” by gay rights activists. Bryant was a vocal opponent of local ordinances that provided protections for the LGBTQ community. Protesters responded by throwing a pie in her face at a press conference, to which she famously responded, “At least it was a fruit pie.”

The glitter ash events organized for Ash Wednesday are a quieter use of sparkle in this tradition of protests in support of the LGBTQ community. The blending of glitter with Ash Wednesday ashes exemplifies the ease with which glitter can be adapted and applied to create opportunities for people to express radical love and solidarity.

Purple glitter transformed a solemn act symbolizing faith, repentance, and the inward reflection that takes place during Lent into a “fabulously conspicuous” expression of love.