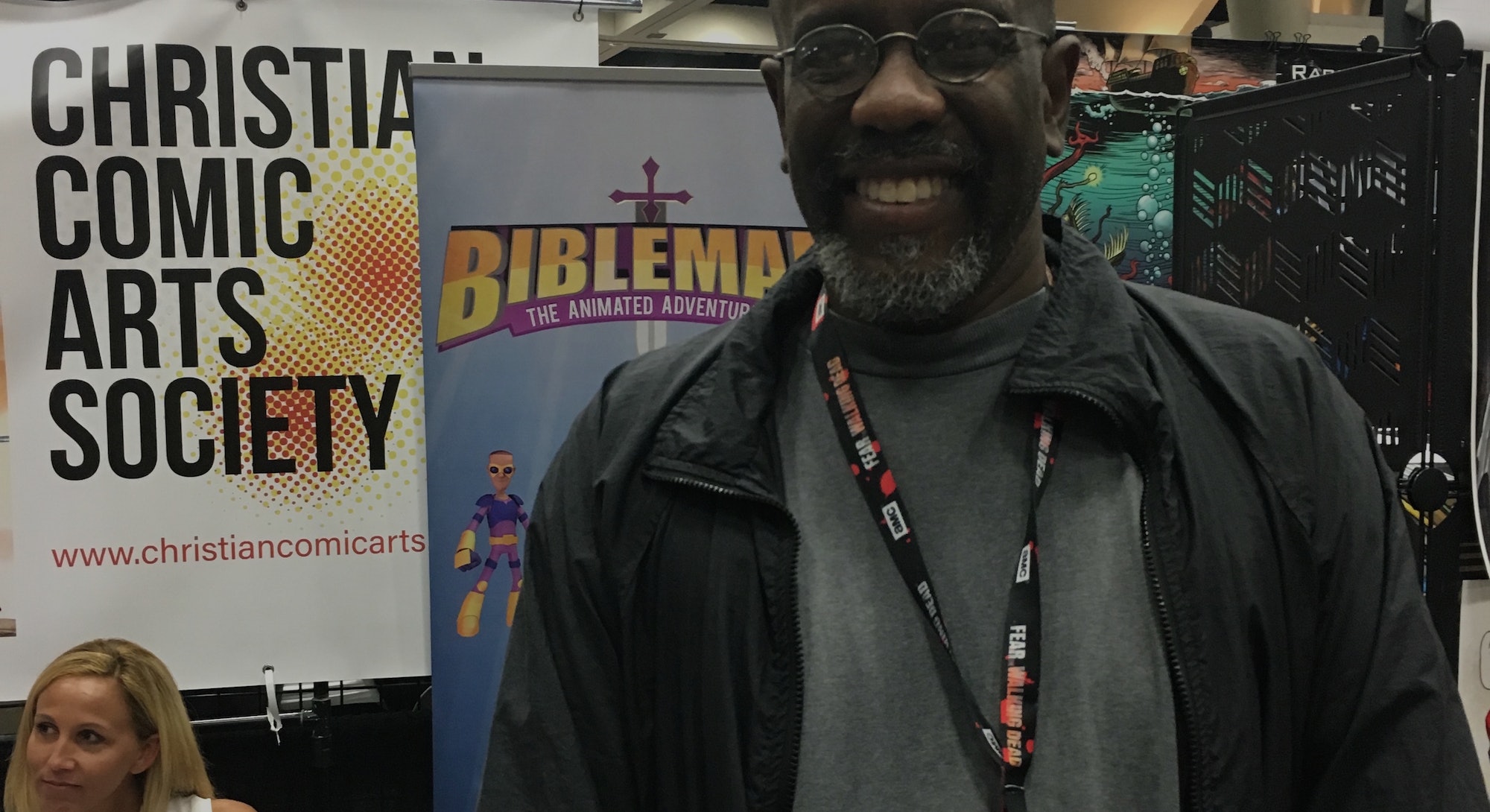 It sits right smack in the middle rows of the main floor at Comic-Con, bordering one of the main thoroughfares for costumed attendees and eager shoppers, and just across from a concession stand that is always swarmed with hungry Deadpools and Harley Quinns. But it’s relatively quiet at the Christian Comic Art Society booth, whose banners for Bibleman: The Animated Adventures and table displays of Holy Bible for Minecrafters are losing the ruthless war for attention that dominates the floor at San Diego Comic-Con.

And yet Ralph Miley Ellis, a founding member of the group and the booth’s chief geek-missionary, is all smiles. He’s happy to spread the good word about both the CCAS and Jesus.

“Our mission is essentially to be a light,” Miley, a tall and jovial man with a graying beard, told Inverse on Friday. “People talk about alternative comic books, and were an alternative. Because we’re comic book geeks, we like the medium. We thought, what better place to have light shine at Comic-Con?”

The organization was founded in 1985, when a comic book artist named Don Ensign placed an ad in the printed Comic Book Buyers Guide looking to connect with other religious-minded creators and fans. Miley, who spent 33 years teaching art and math at a middle school in Los Angeles, answered Ensign’s call and has been actively involved ever since. This is the group’s 20th year at Comic-Con, giving it a track record far longer than most of the Hollywood studios and toymakers that have parachuted down from Los Angeles over the last decade to turn the event into the world’s largest geek gathering.

When Ensign passed away in 2014, leadership of the CCAS passed to Miley, who eulogized his predecessor on the CCAS website. CCAS boasts about 1500 members online and several dozen more active participants, who volunteer at events like Comic-Con and WonderCon, another Southern California geek fest.

Miley began going to Comic-Con in the early ‘80s, long before he helped launch the CCAS’s booth here, so he’s not so much a fish out of water as a true fan who is mixing his two passions: superheroes and Jesus.

“I was a big Marvel geek back in the day; I loved Fantastic Four and Iron Man,” he says. “Then I started liking some of the independents like Dark Horse. Then when we did small press publishing, I kind of liked doing that too, because you get a lot of different flavors.”

CCAS’s offerings at the convention include plenty of serious religious books, but the goal in San Diego isn’t to confront and convert so much as it is to create a dialogue with casual Christian attendees and curious atheists alike. The humble table stands in stark contrast to the large, flashy booth set up by Scientologists flogging L. Ron Hubbard’s Battlefield Earth.

“That’s why I feel we’ve developed such favor with the Lord to be here, we’re not going to blow horns or carry signs, we just have comic books,” Miley says. “The comic books we have on the freebie table are definitely evangelistic, they share the good news of Jesus Christ. But if a person wants to pick them up, that’s fine; if they don’t want to pick them up, they don’t have to.”

More recently, he recalls a skeptic coming over to read a tract called Are You Descended From Apes? and chuckling at it, and then coming back the next day to collect more of the books on offer. That constitutes a success story in a convention where CCAS members are often seen as strange interlopers, despite their long history as exhibitors.

“One time, girl picked up a tract and she was reading it and her friends said, ‘You know that’s a Christian tract,’ and she dropped it like it was on fire,” Miley remembered, laughing.

Whether they convince anyone to become born-again or even buy a few editions of the Legofied Brick Bible is almost besides the point at Comic-Con. When Miley says they want to create a dialogue, he’s not doing so in the way that stubborn, often bigoted politicians use the word to provide a cover for the hateful, close-minded beliefs they espouse. This year, they host a panel on Sunday morning (a sermon will be given, because everyone should be in church); an even more significant event went down about five years ago, when Miley decided to get to know the people running the booth for Prism Comics, which promotes LGBTQ creators and comics.

The conversation led to an invitation in 2013 to Prism’s own convention, Bent Con, to present a panel on spirituality in comics. Accepting the offer was a no-brainer.

Similarly, the CCAS tries to incorporate a wide range of comics in both what it promotes, and what it puts out as a small press publisher that releases a book or two a year.

“We have people who do allegories, we have Christians who work in the entertainment industry, such as Mike Miller, who works for DC, and Sergio Cariello, who has worked for Marvel and DC,” Miley says. “These are people who are professionals and if they have a book out, we’ll go push it out because they’re Christian.”

One of CCAS’s biggest hits, as a publisher, has been a book called Proverbs and Parables, which features graphic representations of biblical wisdom, drawn by pro comic artist members of the group. It’s not economical to print more than a book or two per year, but this one has long been one of their best-sellers. It’s important to Miley not just because it stands as his favorite book to have published, but because of how it has helped lure more conservative, cautious Christians to a medium often known for its gratuitous violence and busty women.

“One thing you learn is that when you’re dealing with a conservative Christian market, they see Comic-Con and they say, ‘I don’t know about this…’” Miley says, laughing. “There is some reluctance. It’s a bit of ‘Eww, what’s that?’ It’s often the older people. If you’re dealing with a lot of younger kids, because they grew up in a culture where comic books are now the thing, they’re far more accepting.”

And so, seeking a way to convince that older demographic that comic books were not evil, and inspired by Bent-Con’s resounding success, the CCAS launched Alpha Omega Con, a little Christian-focused comic book convention at a church in a suburb of L.A.

Alpha Omega Con is set for its third annual meeting in September. Miley says the convention offers a sort of boarding ramp to the comics world for those religious Christians still reluctant to accept the art form — and introduce non-pious types to the religion in a safe, visually engaging manner.

“The Alpha Omega convention is more like an outreach, because we also invite vendors who aren’t Christian, but have family-friendly material,” he explains. “We want them to come and get a flavor for what Christianity is about. The past two conventions, some of the people have just marveled at how nice the Christians were to them.”

About 300 or so people came to the last Alpha Omega, making it a small but not-insignificant event, and one very unique even in a world saturated with comic book conventions. And as with his booth at Comic-Con, Miley isn’t so concerned with achieving big numbers; he’s been doing this for the last two decades, slowly but surely spreading the good word about his favorite superhero.