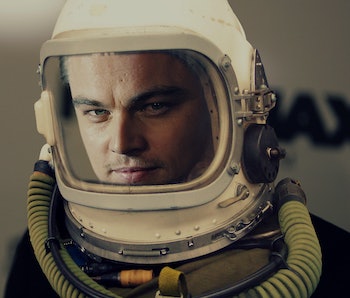 On Monday, SpaceX announced it would send two wealthy patricians on a roundabout trip to the moon aboard its Dragon 2 spacecraft in 2018.

There’s no word yet on who the lucky humans are, but we can whittle down our options on the basis of the criteria provided by Elon Musk: We know these people will have to be rich as hell, given that the price of a ticket is an estimated $90 million.

They’ll also have to be super fit, because space travel can be incredibly taxing on the human body, particularly the heart, eyes, and possibly even the penis.

And of course, they’re going to have to be people who have expressed an interest in going to space. Dispassionate curmudgeons need not apply.

But a fat wallet, a swole bod, and a dogged determination to see Earth from above can’t guarantee that any of these passengers are going to survive the trip. Space travel is tough on the brain and the soul! Here’s who Inverse thinks is most likely to last the week.

In 2013, the now-Oscar-winning actor and possible Oscars saboteur was one of the first to buy a ticket on Richard Branson’s Virgin Galactic rocket to space. Musk’s steep ticket price won’t be an issue for DiCaprio or his personal eyebrow plucker, given the actor is worth $245 million.

One obstacle might be fitness. Long gone are the days of DiCaprio’s Titanic youth — he can’t even fight a bear! — and because the ship will have a limited supply of oxygen, vaping will probably be prohibited. Your call, Leo.

Justin Timberlake’s eternal underling, Lance Bass, definitely can’t afford a ticket on Musk’s rocket, even if he scrapes together all the savings from his N*SYNC glory days. But he wants to go so goddamn badly! He’s been singing about it for almost twenty years! If he plays his measly $22 million net worth right, he can probably put together a strong enough Kickstarter campaign to get the funds he needs. While Bass’s recent hospitalization might suggest he’s not fit enough to withstand the physical demands of space, his sunny attitude — “I’m one appendix lighter!,” he told the press — shows that he’s at least got the necessary psychological strength to deal with the deafening isolation of the cosmos.

There are plenty of people who would like to give the Biebs a one-way ticket to space, but unfortunately for them, the pop lord — worth an estimated $225 million — can definitely pay for his own round trip. At least he’s got plans to be productive:

As Vice pointed out in 2013, however, technical and legal complications make it so that Bieber can’t do drugs, bring his monkey, throw a party, or have sex in space, so it’s unclear how he will fill his time. We suggest he take the time to try and indulge in one of his legendary crying episodes because in space, tears don’t fall.

At 49, Musk’s frenemy and occasional meat printer isn’t the youngest of the potentially space-faring bunch. But with a net worth of $2.7 billion and rumors that he regularly downs human growth hormone pills, this freewheeling libertarian can probably afford to pull out all the stops — even the vampiric ones — to ensure he’s fit enough for the rigors of space travel. This sentiment alone puts the tech lord at a huge advantage over the rest of the kids on this list. Thiel, whose keen interest in funding deep space flight must belie some wish to detach from the Earth, does not fuck around.

At 62 years old, the Avatar director is the oldest on this list, but he’s got a huge physical advantage over his fellow passengers: Cameron’s body, which has spent long stretches of its existence at the bottom of the sea, is no stranger to extreme pressure. He’s admitted that he’s tried to shoot a 3D movie on the International Space Station with NASA — a proposal that fell through in the early 2000s — so it’s clear that he’s got a hankering for space, as well as the cash to back it up. It helps that Cameron, who is currently worth $700 million, is sick of humanity — he recently called it the “biggest freakin’ idiot civilization in history right now” — and that he and Elon are already pals, both being members of the secretive Explorers Club.

The flask-toting, UFO-obsessed bad bitch of pop also bought a ticket on Branson’s celebrity ship in 2013. If her role in Luc Besson’s 2016 space-age sleeper hit Valerian is any indication, RiRi will do just fine in space. We already know, from her “Sledgehammer” video, that she’ll look fly as hell.

There’s just one problem: like Bieber, Rihanna can’t spark up a fat doobie on Musk’s precious ship, so she’ll have to convince him to let her bring a suitcase of edibles if she wants to maintain a consistently sweet space high. With her net worth of $230 million, however, she can probably buy her brownies their own seat.

Two words: Apollo 13. Earth’s most beloved silver screen astronaut — sorry, Matt Damon — may be 60 years old, but that time has resulted in a net worth of $350 million. Hanks has battled the Illuminati, survived many, many trips in isolation, and, oh, averted catastrophe on a NASA mission. What else does a spacefarer need?

Yes, those are fictional roles, but they do require a keen ability to learn, bolstered by a passion try new things. In 2009, when AMC asked him if he’d ever go to space IRL, he said, “I’d do it in a minute” — but expressed concern about space travel’s then-$400 million price tag. We know he can definitely afford a ticket on Branson’s ship, and his recent “Astronaut” stint on Maya and Marty made it clear that he’s still into the idea of space travel. And if anything went wrong on the ship, there’s absolutely zero doubt that Hanks would sacrifice himself to save his fellow passengers — or the rest of mankind.