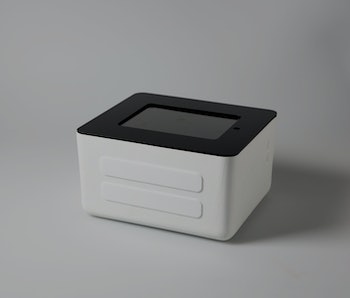 As the world’s economies fluctuate and populations in BRIC countries steadily climb, public policy wonks are starting to get very concerned about our collective dietary future. Enter the Cultivator: a microwave-sized machine designed for bioprinting meat, right on your kitchen counter.

In previous eras, this device might be sold as a convenience, a next-gen microwave, but now it’s a tool to fight both under- and over-consumption.

See, meat is expensive to produce. Raising livestock requires huge swaths of land, water, feed, fertilizer, fuel, waste disposal capacity, and other resources—and almost always without a positive return (cows, for example, produce 17 times less grain as meat than they consume for food). Some scientists even think humans on Earth will need to turn almost entirely vegetarian by 2050 to avoid calamitous water shortages. So if we want to keep eating meat (and not switch to substitute proteins like insects to satiate our carnivorous thirst), we’ll need to find other ways to produce it.

With that in mind, two German design students, Sarah Mautsch and Aaron Abentheuer, developed Cultivator as a concept for how middle-class individuals and small families could generate smaller portions of meat right in their own kitchen. The meat created would not appear as familiar pieces most people know (like chicken breasts or slabs of steak), but as shapes designed for efficiency while retaining flavor and nutrients. The machine would also conform to the sustainable energy needs of the future by using solar panels for power.

Users basically use the onscreen interface to select what kind of meat they’re looking for. After selecting flavor, recipe, and serving size, they can choose to modify other characteristics such as cholesterol, fat, calcium, and other nutrients, according to individual needs. The machine than starts to build the meat by adding layers of artificially synthesized organic cells, layer by layer. As the “bioink” comes together, a slab of meat forms. That meat — if used correctly — gets cooked.

Of course, this Cultivator is just a concept — albeit one that seems to hit closer to realizing what a meat bioprinter might look like than others before. Mautsch and Abentheuer certainly aren’t the first to think about it. US startup Modern Meadow, funded by Peter Thiel, wants to develop a 3D printer that can produce meat on an industrial scale, and plenty of scientists are looking into how meat could be artificially grown out of petri dishes, which lack the kitchen counter appeal.

More like this
Innovation
12 hours ago
A wild new plane-train hybrid could whoosh you to your destination — if it can get off the ground
By Molly Glick
Innovation
8.5.2022 6:30 PM
This breakthrough stem-cell therapy could reverse genetic blindness
By Charles Q. Choi
Innovation
8.5.2022 11:00 AM
Alexa could diagnose Alzheimer’s and other brain conditions — should it?
By Joanna Thompson
Share: