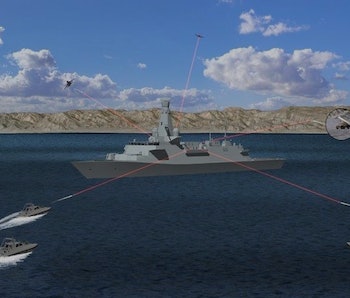 The British government recently signed a £30m contract with a defence and aerospace consortium to deliver a brand new prototype laser weapon. The announcement of the project, named “UK Dragonfire,” coincided with the release of a new Star Wars film, so perhaps it is unsurprising that media coverage of the weapons system owed rather more to George Lucas than it did to any current reality.

So is UK Dragonfire science fiction, or a really viable defence system? And how new is it? After all, we’ve been using lasers for decades in industrial processes, lecture theatres, and compact disc players. The criminal prosecutions of individuals shining lasers at aircraft do suggest that lasers have potential to do serious damage, and this potential has been considered for a very long time. The Martian “Heat Ray” in H.G. Wells’ War of the Worlds from 1897 is well over a century old, and the invention by British scientist Robert Watson-Watt of radar originated in a 1930s ambition to create a British military “death ray.”

In fact the UK has been using lasers in weapons for over 30 years. In the Falklands War of 1982, a shipboard laser weapon designed to blind attacking pilots was deployed, and in the 1991 Gulf War lasers were used to guide bombs to targets – a technique still used by the RAF today.

However, the use of a laser to actually destroy a target directly has proved a much tougher problem than using it to blind pilots or guide targets. There are two fundamental problems: first, getting enough energy, probably 30-60 kiloWatts – the electrical consumption of an average street – into the laser beam; and second, keeping the laser pointed at precisely the same spot for long enough to transfer that energy.

The new weapon being developed for the Ministry of Defence will therefore have two major technical requirements to get over these obstacles: making an extremely powerful laser beam that can stay focused on the same point on the target long enough to critically damage it. A 20cm target 3km away would be less than four thousandths of a degree in size, and if it was a missile flying at twice the speed of sound, could be moving at up to 25 degrees per second. It would also probably be manoeuvering to try and avoid being shot down for good measure.

This is a very difficult thing to do. And it would need to be done for several seconds at least, while the high powered laser pours energy into the target. Simply hitting the target for a fraction of a second is unlikely to do enough damage to take out a robustly manufactured military missile or drone.

The power of light

But it has been done before, most impressively by the United States Air Force whose YAL-1 Laser system successfully shot down several ballistic missiles during flight tests in 2010. However, its worth noting that the US government spent over £4billion on that project – over 100 times the British government’s budget. And it is unlikely that the Americans have shared many of the secrets behind their technology.

So what will Britain get for its 30m shot at a laser weapon? Well, definitely not something designed to blind people, as these are now banned by international treaty. But the prototype should, by the time of testing around 2019, demonstrate the basic ability to track a target such as a weaponised drone or an anti-ship missile, and hopefully put a relatively low powered laser onto it. With any luck, there will also be a good understanding of how to power and keep cool an extremely high energy laser, in a controllable environment, for short periods of time on demand.

For something that is funded as a research project, that’s probably good enough. And by then, the UK will have gained quite a lot. It will know how to produce a full-scale deployable weapon, it will have a cadre of engineers and scientists who understand the technology of such a weapon, and they’ll be working for the British companies who the Ministry of Defence would want to build an operational system.

Those companies and their engineers can of course also develop commercial products using the same knowledge (although usually with restrictions on any military usage). But the fact that Britain will have a good national understanding of the technologies will also make it much easier to talk to the US about what they’ve got. That in itself should justify the spending of what amounts to a 1.5% slice of the Ministry of Defence’s £1.9 billion annual research and development budget.