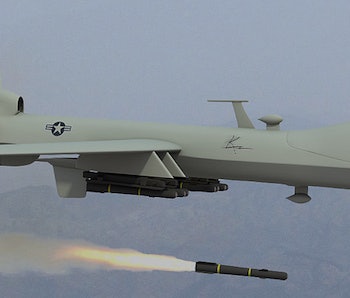 General Atomics Aeronautical Systems, Inc., the creators of the famous (or infamous, if you like) military Reaper and Predator drones, recently announced its flying robots are missing a little something: High-energy lasers. Solid-state, 150-kilowatt lasers could be a reality as early as 2017, General Atomics executives told Defense One.

Over the past decade, laser weapons have moved out of the realm of speculation and on to military vehicles. In November 2014, the Navy tested its Laser Weapon System at sea. With an output of 30 kilowatts, the LaWS system was strong enough to blow small drone targets out of the air:

General Atomics’ lasers will have five times the juice. But drones will be a particularly tough platform for lasers, considering the vibrations of flight and targeting a laser through air potentially clouded with dust and other particulate matter. As General Atomics Vice President Michael Perry pointed out to Defense One.

“Before you spend any money on a laser you better darn well show that you can acquire, ID, and track the objects of interest so that you could put a laser on them,” said Perry. “You have to be able to compensate for aero-optic distortion.”

If General Atomics is successful, the company envisions drones taking on defensive roles — shooting down other drones or aircraft, for instance — in addition to their historically offensive, smite-from-the-heavens missions.