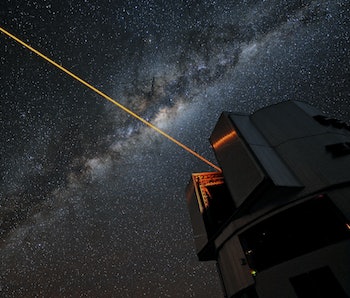 If intelligent extraterrestrials ever actually visit Earth and they turn out to be hostile, the sad truth is we’re basically fucked. If other life forms are capable of interstellar travel, then chances are they are in a more than ideal situation to successfully wage an intergalactic war. How do we compete?

Well if you can’t win, the next best thing to do is hide. That’s the idea proposed by a pair of astronomers at Columbia University in New York City. And in a new paper published in the Monthly Notices of the Royal Astronomical Society they suggest making a giant laser-powered cloaking device to conceal the entire planet from aliens.

Yeah, they’re not joking around.

Basically, they want to take the technique we currently use to search for exoplanets (in the hopes of finding one that’s potentially habitable) — and turn it on its head. Right now, to find other worlds, we point our big telescopes toward distant stars and check to see if a shadow is cast on the light glowing out. If we witness a consistent blip in the light, it usually means that a planet is transiting past the star as it continues its orbit. That little patience in observation has let us find more than a thousand exoplanets in just the last few decades. And it’s raised hopes we might one day find another planet that could sustain life — or maybe even currently hosts it.

It’s pretty easy to imagine that aliens would be using the same technique to try to find other life as well. And that would be the way they might stumble upon our planet. If we’re looking to stay low for the remainder of our existence, then we have to make sure E.T. can’t see our planet transit the sun.

The key, according to the researchers, could be to build a gigantic laser, and direct the beam straight at the star where we think aliens live. As we transit the sun in the view of the alien homeward, we just switch on the laser and presto — the light still shines and no one’s the wiser.

The researchers think a continuous 30-megawatt laser that stays on for about 10 hours, once a year, would do the trick. That’s about the same energy collected by the International Space Station’s solar cells every year. To cover all bases, we could also build a laser system that beams out light at all effective wavelengths — though this would probably require a total power closer to about 250 megawatts.

As an alternative, the researchers also think we could just focus on keeping under wraps signs that there’s biological activity happening on the planet. A laser of that magnitude would only need about 160 kilowatts of power.

And let’s say we decide we want aliens to know who we are and acknowledge our feeble existence. The lasers could be used to actually broadcast our existence.

“There is an ongoing debate as to whether we should advertise ourselves or hide from advanced civilizations potentially living on planets elsewhere in the galaxy,” coauthor David Kipping said in a news release. “Our work offers humanity a choice, at least for transit events, and we should think about what we want to do.”

Still, the fear of whether we should hide from or say hi to aliens is probably moot. In all likelihood, if intelligent extraterrestrials are out there, they’d probably quickly decide they want nothing to do with us.

More like this
Science
Sep. 24, 2022
Super-Earths may be the best places to look for alien life
By Chris Impey and The Conversation
Innovation
Sep. 22, 2022
Trash can-sized robots could revolutionize how you travel — but there's a catch
By Molly Glick
Entertainment
Oct. 2, 2022
Kingdom of the Planet of the Apes could solve this major canon problem
By Ryan Britt
Related Tags
Share: