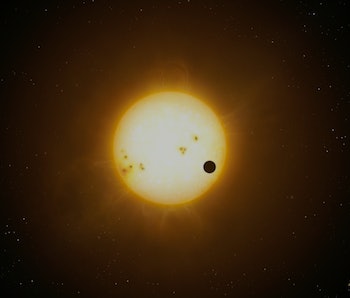 Over the last decade, exoplanet research has become a self-contained field thanks largely to NASA’s Kepler spacecraft. Launched in 2009, Kepler finds other planets in distant galaxies by tracking light readings from stars, which are altered when orbiting planets pass by. This is a relatively simple trick that has led to the discovery of more than a thousand worlds. It is, some astronomers are claiming, such a logical process that we should act under the assumption — or the premise anyway — that extraterrestrials may be using the same method to scan the universe. We should, in short, look for aliens in our shadow.

According to a report set to be published by René Heller of the Max Planck Institute for Solar System Research and Ralph Pudritz of McMaster University in the April issue of Astrobiology, we should narrow our search for E.T. to exoplanets that can see Earth passing in front of the sun. But let’s unpack the word “narrow.” There are an estimated 10,000 stars within 3,260 light-years of the Earth, the area of the universe from which our orbit is visible. Right now, we know of 82 sun-like stars within that area, but that is likely just a fraction of what’s out there.

Still, it’s a place to start.

Heller and Pudritz think SETI projects from here on out should focus on looking for signals from these planets. The thinking will make natural sense to anyone who was lost in a supermarket as a kid: It’s way easier to find someone who is looking for you than someone who is not. The chances for contact are simply highest in these particular solar systems.

To be clear, the argument to study transits to find aliens is not an entirely new idea, just one that hasn’t been discussed very much over the last few years. Heller and Pudritz think that, given the new Kepler data, it’s time to change that. Everything old is new again.

Specifically, Heller thinks the best candidates to study right now might be planets orbiting Van Maanen’s Star — about 13 light-years away. Although the white dwarf star exists as the remains of a stellar explosion, any civilizations that survived the calamity would have an incredible view of Earth doing its thing.