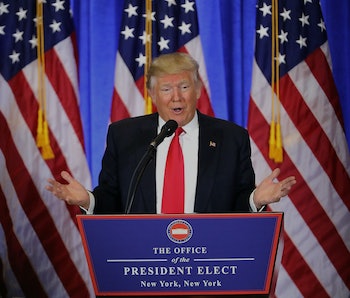 On Wednesday, President-elect Donald Trump held his first press conference in more than five months. It didn’t really go well for anyone involved. The president-elect deflected questions about Russian hacking at length, but one of the most confusing parts of his answer was when he mentioned that the “greatest computer minds” in the world were going to be hard at work to “form a defense” against cyberwarfare.

It’s still unclear, but the president-elect might be talking about Elon Musk, alongside the other Silicon Valley tech CEOs he met at Trump tower on December 14. That would be crazy, however, because no one in that room could claim cybersecurity as their primary area of expertise.

Here’s Trump’s response to the a question about Russian espionage and the unsubstantiated but still explosive memo about his connections to Russia:

We had — we had much hacking going on. And one of the things were gonna do, we have some of the greatest computer minds anywhere in the world that we’ve assembled.

You saw just a sample of it two weeks ago up here where we had the six top people in the world — they were never in the same room together as a group. And we’re gonna put those minds together and we’re going to form a defense.

It seems like Trump is referring to December 14 meeting, but that was nearly a month ago. On December 29, he finally agreed to hear an intelligence briefing on Russian hacking, but there was no mention of a meeting with “some of the greatest computer minds anywhere in the world.” Is he talking about conference with Musk, Apple CEO Tim Cook, Microsoft President Brad Smith, Amazon CEO Jeff Bezos, Google Founder Larry Page, Facebook COO Sheryl Sandberg, and other Silicon Valley leaders? There were way more than those six people at the meeting (including Peter Thiel, Microsoft CEO Satya Nadella, and more), and uh, also, none of those people are cybersecurity experts.

Sure, calling many of the people in that room the “greatest computer minds anywhere in the world” could be technically correct insofar as they are all undoubtedly very smart people who have jobs in the computing and technology industries, but if Trump wants to make any headway in bolstering U.S. defenses against cyber attack, there are probably better people to call than a bunch of people who made a lot of money off of selling iPods and electric cars.

He also said that these six unidentified people had never been in a room together, which would also be ridiculous, because many of the people in that room [attend meetings and conferences together all the time]https://www.inverse.com/article/12530-tim-cook-and-other-tech-ceos-allegedly-attend-meeting-to-stop-donald-trump), so their Trump tower boardroom sit down was nothing new.

It’s possible that Trump had a clandestine meeting with six of the world’s best cybersecurity experts and didn’t tell anyone about it until now, sure. But if he’s waiting for Elon Musk to stop the Russians hacking into U.S. infrastructure, we might all be screwed. Then again, Teslas are reasonably hack-proof, so who knows.