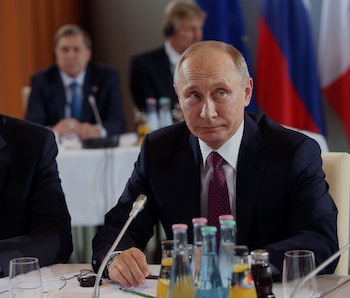 On Friday afternoon, the office of the Director of National Intelligence released a 25-page report on the evidence and influence of Russian cyberattacks during the 2016 election. The full report, which you can read here, was released to the media on Friday afternoon, after President-elect Donald Trump received an assumedly far more-classified version during a briefing earlier Friday afternoon, after which he finally acknowledged that Russia and China have conducted cyber attacks on U.S. Government and civilian digital infrastructure.

For skeptics of the federal government, it’s important to note that the declassified report still doesn’t present any hard evidence of its conclusions. The publicly available evidence of Russian involvement isn’t conclusive, but whatever the CIA, FBI, and NSA have was enough for the agencies to collectively make some pretty shocking allegations about the nature of Russian President Vladimir Putin’s involvement in the election. It also presents the strongest worded and most explicit condemnation of the Russian involvement, and leaves absolutely no wiggle room as to the collective intelligence agencies’ conclusions.

While hard data proving the link between the people who hacked into the Democratic National Committee still isn’t publicly available, the report states right off the bat that, yep, it was Putin. He knew about it, he ordered it, and it got done.

The report concludes that the initial goals of the Russian campaign was to basically shake up democracy in the U.S. as much as possible, and “undermine public faith in the U.S. democratic process,” while harming Former Secretary of State Hillary Clinton as much as possible in the process. At the beginning of the campaign, the Russians assumed (as did everyone) that Hillary Clinton would be the next president, and wanted to make the beginning of her time in office as much of a shitshow as possible. This continued all the way to the end of the campaign, although the report says the campaign “developed a clear preference for President-elect Trump.”

The CIA and FBI have “high confidence” that Putin wanted to help Trump, and the NSA says it has “moderate confidence.” It’s typical for spy agencies to hedge their bets, and certainly seems like there’s a strong consensus across all parties involved.

4. Putin saw the election campaign as retaliation for the Panama Papers disclosure and Olympic doping scandal.

For years, the Russian Olympic Program has engaged in a massive, state-sponsored campaign to essentially juice the shit out of its athletes to stop the motherland losing to any of its puny rivals in vital international past times like downhill skiing. When news of the massive doping program started to break in the international media, Putin and the Russian government were pissed, and began to devote resources toward proving that the U.S. government was just as bad (our government does plenty of horrible things, but at least so far we haven’t been caught cheating at sports on this massive of a scale). The Panama Papers scandal also disproportionately implicated Russian businessmen and the country’s financial network, oh, and called out Putin himself.

While may of Donald Trump’s rampant Twitter followers are real Americans standing up for what they believe in (even if that’s mostly just conspiracy theories), the Russians regularly used paid social media users to hype up favorable stories. In June, the New York Times published a lengthy investigation into the St. Petersburg office agency that hired young workers and paid them to set up thousands of fake social media accounts responsible for sharing and propagating fake news and other misinformation.

Russia’s two English-language propaganda arms, Russia Today and Sputnik news, got huge bumps to their budgets in recent years, and have used their considerable resources to continue churning out anti-U.S. propaganda and stories with a heavy pro-Russian bias, alongside run of the mill reports on international issues that disguised their coverage as that of an independent news organization, like the BBC, rather than as a “messaging tool” the Kremlin used to “undermine faith in the U.S. Government and fuel political protest.”

7. Guccifer 2.0 wasn’t just one dude, and it was definitely Russian.

This one is pretty self explanatory. The DNC hacker Guccifer 2.0 vehemently said he wasn’t Russian, but nope, yeah, the report definitely says he was a “persona” used by Russian intelligence.

We assess with high confidence that Russian military intelligence (General Staff Main Intelligence Directorate or GRU) used the Guccifer 2.0 persona and DCLeaks.com to release US victim data obtained in cyber operations publicly and in exclusives to media outlets and relayed material to WikiLeaks.

8. The Republicans got hacked too (but Russia didn’t do anything with the info).

The report acknowledges that hacking attempts targeted “targets associated with both major U.S. political parties.” However, only the Democrats really got burned. The report says that “Russia collected [data] on some Republican-affiliated targets but did not conduct a comparable disclosure campaign,” meaning whatever the Russians found on the Republicans, they decided it was either inconsequential or didn’t want to release anything for fear of derailing the Trump train.

9. Russian “Directorate S” (Illegals) spies (yes, like The Americans) were watching the 2008 Election

In 2010, U.S. intelligence services arrested 11 Russian spies living in deep cover with fake biographies, part of Moscow’s “Directorate S” program. The program’s exposure was so intriguing that it inspired the FX hit show The Americans. From the report:

Since the Cold War, Russian intelligence efforts related to US elections have primarily focused on foreign intelligence collection. For decades, Russian and Soviet intelligence services have sought to collect insider information from US political parties that could help Russian leaders understand a new US administration’s plans and priorities.

The Russian Foreign Intelligence Service (SVR) Directorate S (Illegals) officers arrested in the United States in 2010 reported to Moscow about the 2008 election.

Simply put, Putin has found a strategy that works. While his influence is hardly the main reason Hillary Clinton lost the election, it’s difficult to deny the level that Russian propaganda managed to destabilize the American electorate. The report says that Russian intelligence immediately began another spear phishing campaign targeting government employees and other high-profile political and NGO operatives. The report says that there really isn’t a downside for Putin — it’s cheap, it’s low-risk, and it works.

Putin’s public views of the disclosures suggest the Kremlin and the intelligence services will continue to consider using cyber-enabled disclosure operations because of their belief that these can accomplish Russian goals relatively easily without significant damage to Russian interests.

Donald Trump is our president, and this is the world we live in now.