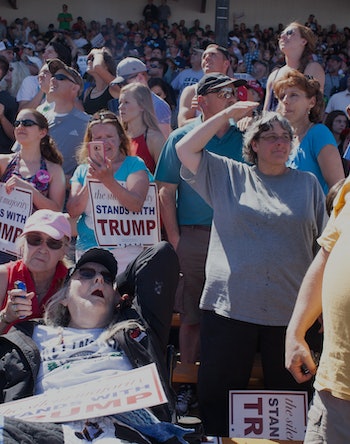 Last Friday, I wrote a story about Donald Trump’s cameo in Surgeon Simulator. I’m a casual gamer, and as I noted in the story, Surgeon Simulator is a ludicrously difficult game. As I also noted, it makes disemboweling people pretty fun.

The game lets you control the full range of motion of a surgeon’s hand down to individual fingers, and asks you to perform a heart transplant using a variety of quasi-medical devices, including a hatchet and a bottle of Trump Vodka. Because trying to control the body’s most delicate appendage with five keys and a mouse is stupidly hard, most of the time, the patient ends up dead. With Donald Trump on the table, this was doubly like: The game offered frustrated, angry Americans a chance to tear apart the man they see tearing apart their country. I fell firmly into this category.

The original story had plenty of gruesome screenshots, and I didn’t pretend to not enjoy botching a virtual heart transplant on a public figure who has polarized the country with violent rhetoric, nonsensical rants, and hateful comments on women, minorities and immigrants. In some ways, I sank to Trump’s level — maybe slightly beneath it — and boy, did that piss off his supporters.

On Saturday morning, I went viral. @risetoflyy, a pro-Trump Twitter account with 18,700 followers sent out my story, and accused me of “death threatening” Donald Trump (her screen name, “Jack for Trump!”, is purely coincidence and does not refer to me).

The initial tweet, above, only racked up 17 or so retweets, but “Jack for Trump!” kept at it, and the pro-Trump Twitter-verse joined in, calling for my arrest by the Secret Service and the FBI.

They also tried to bring Dan Scavino, a top advisor to Trump, in to deliver a coup de grace. Scavino could not be bothered.

While my article was far from objective or impartial journalism (concepts that the entire media have struggled with when dealing with Trump), I don’t think that it incited any real-life violence toward the candidate himself. Trump Twitter, on the other hand, definitely disagreed.

“Jack’s” dedication to “exposing” me went on for most of the day, but after my Twitter mentions had calmed down a little, I decided I wanted to talk through my brief infamy on Trump-twitter with the person who triggered it. On Monday, I reached out to “Jack for Trump!” through Twitter, and she agreed to speak, anonymously, over the phone. The voice on the end of the phone appeared to be female, with a relatively neutral accent that could have come from any number of States in the American heartland. Jack for Trump! would not let me record the conversation, saying “that’s not cool at all,” because her “very distinctive voice” could be identified if I played the conversation on the radio. Surprisingly enough, our conversation was cordial and mostly respectful, despite my status as a direct threat to Donald Trump’s life and Jack for Trump!’s status as an anonymous Twitter user with #DeathToIlluminati in her profile bio.

My main question was simple — why was my admittedly flippant article interpreted as a death threat?

“Your article was built up to where I believe it incites violence by saying quote, ‘murdering the fuck out of him,’ unquote,” Jack, who asked that I not record the conversation, told me as I typed furiously. “You started out humorous, and it was humorous, but underneath it, anyone who’s angry with Donald Trump, or has any kind of violence inside them, it’s my opinion that that portion incites violence.”

I conceded that my story was definitely strongly worded, surprised to find myself having a pretty calm conversation. Jack for Trump! sounded more like a slightly disappointed relative who wanted to explain why I should let Jesus into my heart than a person who wanted to see me in prison.

“I wouldn’t write that kind of language,” Jack for Trump! told me. “I would distance myself from that game. That game is just, it’s playing into the hands of those people who want to murder Donald Trump and you know what? Nobody should be doing the same thing to Hillary Clinton or Bernie.”

Trump is an easy target for online activists, gamers, and yes, pop culture writers. It’s difficult for these groups to take Trump seriously when his supporters include Angry Birds-loving white supremacists and the candidate himself doesn’t seem to have a grasp on internet culture. Still, his candidacy has tapped into deep feelings of otherness and abandonment in working-class white Americans, dismayed that establishment politics has become exclusionary.

Part of this anti-establishment ethos manifests itself in a feeling of persecution at the hands of the media and the upper class (of which, ironically, Trump is a member). It’s the same ethos that leads to the “white genocide” theory, which often melds with other “Illuminati-esque” conspiracy theories, especially in online communities like Twitter, where users can self-select the information they’re exposed to.

While she never explicitly mentioned the “Illuminati” buzzword, Jack for Trump! spoke repeatedly of an “invisible hand” that connected world leaders, and suggested that I watch the last 30 minutes of a “six-hour documentary” that Russia Today produced about the opening of the Gotthard Tunnel. The documentary, she said, highlighted the (admittedly) weird, ritualistic opening ceremony that Jack for Trump! thought was reminiscent, and possibly connected, to other events, including the Olympic Games and the Super Bowl. She said the “invisible hand” (she had seemingly recycled the term) was also responsible for sponsoring chaos in the political system, and starting Occupy Wall Street.

“If you look at the Superbowl halftime shows, if you see the openings of the Olympics all these ceremonies going on they’re all rituals,” Jack for Trump! explained. “Hiring protestors, paying protestors are completely connected to the ritualistic ceremonies, things that you would never suspect are sinister, but are deadly sinister to the world. We’re getting to a point which is blatant, where they, meaning they the invisible hand, aren’t even trying to hide it anymore.”

Jack for Trump! said she didn’t know whether Bossa Studios, who produces Surgeon Simulator, was connected to the invisible hand. She said that going after journalists who allegedly made death threats to Trump (i.e. me), might not be “high on the priority list” for the Secret Service and the FBI. And I think she was trying to be reassuring about this. “No, I don’t hear from them,” she said, after I asked if they had responded to her @ mentions, calling for my arrest.

Our conversation ended amicably, like it had started. I promised to check out the video about the Gotthard Tunnel and I did. It was weird, but I didn’t see an invisible hand. I don’t know what that proves, if anything.