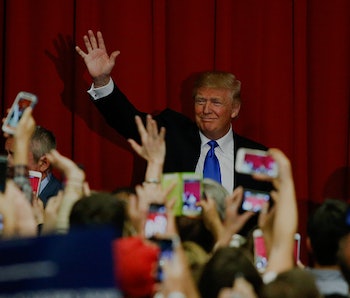 Is presumptive Republican presidential nominee Donald Trump a media-made candidate? The notion has been all but accepted as fact, with a March New York Times column even pointing out that The Donald, by that time, had earned almost $2 billion in free campaign coverage on written (online and web), broadcast, and social media mediums.

A new study released today by the Parse.ly analytics firm, however, shows that online articles about Trump, though more abundant than those for any other candidate, have since last November consistently received fewer clicks per article, month by month, than fellow presidential hopefuls. The full six-month survey awards former Secretary of State Hillary Clinton the best click-per-article rate, with Trump at a narrow second; articles about the former reality TV star only slightly outperformed the average clicks for online pieces covering Senator Ted Cruz, who bowed out of the Republican primary race earlier this month.

The idea that Trump content spikes ratings and boosts internet traffic, and thus earns tons of money for media companies, is rather full throatedly disputed by the Parse.ly research. “On average, an article on Hillary Clinton receives six percent more page views than an article on Trump. Thus, Trump does not appear to be driving revenue,” reads the Parse.ly report that explains the study.

“The media’s focus on Trump has not benefited either readers or publishers.”

When it comes specifically to social media, articles about Clinton’s opponent in the Democratic presidential primary, Senator Bernie Sanders, have seen the largest rate of referral from “sites like Facebook and Twitter,” the report points out. Sanders articles also had the most views originating from search engine queries, leading on that more web users are searching for articles about his campaign than Trump’s.

“Publishers who wanted to bring in external referrals through social or search should have written more articles about Bernie Sanders versus any of the other candidates,” the Parse.ly report states.

Make no mistake, with well over twice as many Trump articles floating around the web than any other candidate, clicks are certainly pouring in for the Republican’s 2016 blonde-haired pony. But given the relative lack of disparity in average clicks for articles covering the handful of candidates near the top, the commentary attached to the Parse.ly research does raise an important question: What if media companies, instead of devoting gobs and gobs of coverage to Trump, had dosed out equal amounts of coverage among the candidates?

Parse.ly data clearly shows that online media is not providing equal coverage to candidates, as one might expect if it were trying to live up to the ideals of our democratic society. This may come as no surprise. However, our analysis also shows that online media did not maximize revenue or social virality by focusing its attention on Trump, despite widely held perceptions to the contrary.

More like this
Innovation
Sep. 29, 2022
Horrifying: Robots may have just gained a creepy new skill
By Molly Glick
Innovation
13 hours ago
Scientists have created a mechanical womb that can grow life in the lab
By Miriam Fauzia
Innovation
Sep. 28, 2022
Look: This tiny robot could change medicine forever
By Katie MacBride
Related Tags
Share: