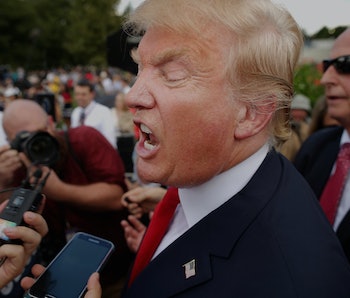 During CNN’s Final Five broadcast on Monday, host Wolf Blitzer asked GOP presidential candidate Donald Trump why he thought white supremacist groups were rallying behind his campaign. Trump stammered in his response and vowed that he is “certainly the least racist person” and that he has “always condemned them.”

But this is simply not so. If you look at Trump’s Twitter account and the accounts of his campaign staff, you’ll find a direct relationship between the Trump campaign and people who believe that white genocide is a real thing happening in the United States. Journalists Ben Kharakh and Dan Primack of Fortune recently used Little Bird, a social media analytics software program, to mine through Twitter data to find people considered #whitegenocide “influencers” and find their connection to the Trump campaign.

Twitter influencers are those who are followed by the majority of people who are talking about the same thing — the thing here being white genocide. Kharakh and Primack found that Trump has retweeted at least 75 people who follow at least three of the top 50 #whitegenocide influencers. His national campaign spokesperson, Katrina Pierson, actually follows the “most influential” #whitegenocide account while four more members of his campaign staff follow top influencers as well.

The Little Bird data also revealed that while Trump’s personal account doesn’t follow any #whitegenocide influencers, 67.5 percent of these influencers do follow his account. But again, this doesn’t mean that Trump doesn’t have a connection with them — for example, he’s retweeted @NeilTurner five times, who, at the time of the Fortune article, had “#WhiteGenocide is real” in its bio —but has since revised it to “#VoteTrump.”

When approached by Fortune, Trump campaign spokeswoman Katrina Pierson repeatedly declined to answer whether or not Trump believes in the reality of white genocide. But many of his supporters certainly do, and this disillusioned belief in a loss of monetary and social capital is what has led them to rally around Trump campaign promises like building a wall between the United States and Mexico and prohibiting Muslims from entering the country.