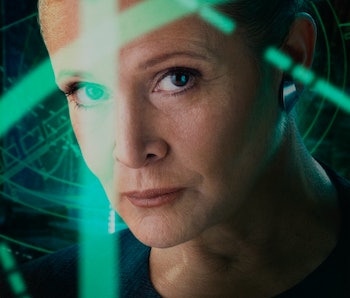 There is no doubting the importance of Leia Organa in the Star Wars universe. The daughter of Galaxy’s prophesied Chosen One, Leia was adopted into royal privileges and given the “Princess” moniker by Bail Organa, a founding member of the Rebel Alliance in which Leia would eventually become vital. Leia, from the moment she was born in the Polis Massa asteroid field, was seemingly bound for greatness, much like her IRL counterpart, Carrie Fisher, daughter of Hollywood royalty and a household name since her appearance in A New Hope in 1977. Fisher’s death on December 27 prompted not only appropriate grief from fans worldwide, but questions about how the Star Wars universe will continue from here.

And while speculation about a fictional universe and a character’s place in it at a time such as this — when a cultural powerhouse, feminist icon, and vitally important mental health advocate has been lost just when the world seems to need her most — might leave a bit of a bad taste in the back of your throat, it’s worth exploring. Fisher imbued Leia with determination, wit, and a “fuck you”-ness that was all her own, and which made Leia the ultimate force to be reckoned with in the Star Wars universe. The New York Times’s obituary perhaps put it best, writing that Fisher made Leia into “a damsel who could very much deal with her own distress.” She commanded the Rebel Alliance with a grace and resolve beyond her years, and later founded the Resistance when terror once again threatened the galaxy that had been so hard-won.

General Organa is expected to play a larger role in the as-yet-unnamed Episode VIII than she did in The Force Awakens. While Leia’s role was that of the grieving mother and the wry ex-something to Han Solo in TFA, her role was minimal compared to Harrison Ford. Of course, Solo’s role will be minimal to nonexistent in the upcoming films. Leia’s twin brother and hermit Jedi extraordinaire, Luke Skywalker, is also thought to be playing a larger role in the next films. Luke’s role will clearly be that of the Master to Rey’s Padawan. He’ll teach her the ways of the Force, perhaps in the hope that he can bring back the Jedi successfully this time. But what does that leave for Leia?

It’s not crazy to assume that Leia will finally get to be a real general. TFA saw her do planning, Mon Mothma-style, with blue-green lights dictating sci-fi computers beyond the audience’s understanding and a circular gathering of well-intentioned, democratic liberals — but she wasn’t a general in the way people think of generals. She was certainly a different person from the one who paced to-and-fro among a ring of fighter pilots, giving steely-eyed orders. That’s typically what people think of when they think “general.” This older, TFA version of Leia is calmer and more thoughtful, but she seems tired and maybe even a little lost. Her brother is missing, her son has turned to the Dark Side, and the First Order is growing more powerful. The democracy she fought for for so long might, once again, be lost. Anyone would be downtrodden after having lived the life Leia has. But if you think that’s going to stop her, think again.

Leia has always been the brains of the operation. Bail Organa sent Leia to Obi-Wan in Rogue One because he trusted her “with my life,” she was elected to the Senate as a teenager, taking her father’s place amongst the figureheads of democracy and quickly realizing that the Senate had no real power left, and she didn’t need anyone. So while Leia’s outward demeanor may have changed as she grew as a person, metamorphosing from a princess without a planet to the founding general of a resistance movement, no one could ever legitimize Leia losing her spirit. Leia has, arguably, the best storyline in the Star Wars universe because the writers of The Force Awakens realized that, after everything she’s gone through, she’d be the best damn general out there.

Every movement needs a leader, and Leia is that perfect leader. She’ll meet up with Luke and Rey again in Episode VIII with Poe and Finn at her side. They’ll continue to fight for freedom in the Star Wars galaxy. Much like Fisher herself, Leia is the ultimate reminder that hardship is meant to be overcome and punctuated with a stark middle finger.

More like this
Entertainment
16 hours ago
45 years ago, George Lucas peaked with the least Star Wars-esque movie ever
By Ryan Britt
Entertainment
5.24.2022 9:30 AM
15 years ago, Satoshi Kon's mind-bending sci-fi thriller foreshadowed Inception
By Allyson Johnson
Entertainment
17 hours ago
The one underrated Star Wars movie you need to watch before Obi-Wan Kenobi
By Jake Kleinman
Related Tags
Share: