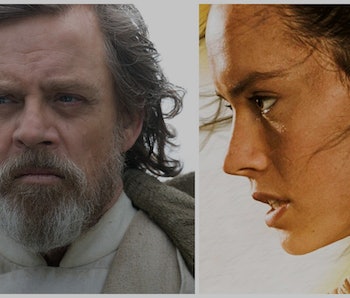 One of the biggest mysteries in the new Star Wars series has been right under our noses this entire time. The truth of who Rey’s parents are might’ve already been teased, or even revealed, in The Force Awakens.

Daisy Ridley told Time Out: London that she’s a bit surprised people haven’t guessed who Rey’s parents are, based on what happens in The Force Awakens. This means it could very well be a character we already know and love, like Luke Skywalker or Obi-Wan Kenobi. Who knows, she could even be related to Kylo Ren … which could make her Han and Leia’s child, or possibly the offspring of one of them after they separated.

“I thought a lot was answered in The Force Awakens,” Ridley said. “Then after the screening I went for a drink with my agent and everyone, and we were chatting away and I realized that, ‘Oh, in their minds its not answered at all!’”

This most likely means that Jyn Erso is not Rey’s mother or grandmother, which would make sense, since Ridley’s brushed off that idea a few times. Of course, the biggest speculation is that Rey is Luke’s daughter, which would explain her strength with the Force and her desire to find him through the film. Ridley said she keeps getting asked if Luke is Rey’s dad, and her latest response was, “Chill out, you’ll see!” Honestly, she’s probably getting sick of being asked this question, but it’s going to be a year until we get any more information on it with Episode VIII, so they’re going to keep coming.