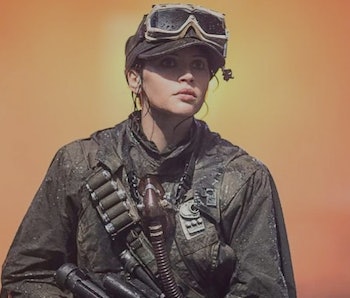 Even if she survives her dangerous mission to steal the Death Star plans, Rogue One might be the only adventure of Jyn Erso. Because there won’t be any direct sequels to Rogue One, (unless some crazy Episode VIII twist comes along) this will be the first and last time we see Jyn Erso in the Star Wars universe.

Spanish publication Prensa Imperial shared some details from the upcoming January issue of Empire, which features tons of information about Rogue One. One of the biggest reveals is that there won’t be a Rogue Two, bucking rumors that the standalone spinoff would get its own multi-film series. Director Gareth Edwards doubled down by jokingly suggesting that if there were ever to be a Rogue One sequel, George Lucas would direct it. However, money’s down on Disney never giving Lucas the driver’s seat on a Star Wars film ever again.

This isn’t automatically because Rogue One is a prequel to A New Hope — after all, Han Solo’s origin is a prequel to the Star Wars series and it’s looking like it could become its own trilogy. It’s probably because Disney is experimenting with standalone Star Wars films that wouldn’t need to be part of a series. That way they can further expand the universe and tell us stories that don’t need to continue in future films.

This leads to further speculation as to what’s going to happen to Jyn Erso. It’s looking more and more like she might die during the struggle to obtain the Death Star plans. If not, there doesn’t seem to be much of a way to connect her with future Star Wars films, since she’s never mentioned in any of them. The only real possibility would be if she was Rey’s grandmother (since it was strongly suggested that Jyn’s not her mother), but that’s a huge speculation that isn’t really backed by a lot of evidence, other than the fact that they look alike. It’s more likely that Jyn Erso’s story ends when the final credits rise. If that’s true, Rogue One would be a standalone film in every sense of the word.