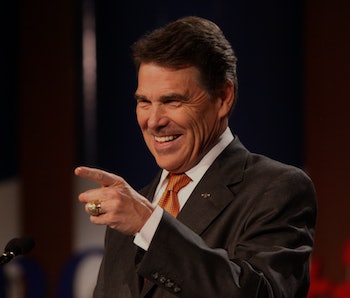 It’s not as sexy as the State Department, not as badass as the Department of Defense, and not visible as the Treasury Department, but the Department of Energy is quietly among the most important agencies in government. The name, admittedly, gives the impression that the Department of Energy has to do with, well, where the country gets its energy. This is true to some degree, as the DOE sponsors a vast array of research in the physical sciences. Under the Obama administration, that work has largely been geared toward clean energy initiatives. It was perhaps for this reason, and because of this misconception, that Rick Perry, now Donald Trump’s pick for secretary of energy, wanted to get rid of the department back when he ran for president — only he had some trouble actually remembering its name.

But the primary function of the Department of Energy has nothing to do with green energy technologies. It’s one that, as Perry would have known if he’d fully understood it years ago, makes the DOE all but indispensable: maintaining America’s nuclear weapons stockpile. That’s where the vast majority of its money goes. During the Cold War as the United States entered its arms race against the Soviet Union, the DOE’s primary function was weapons research. It was the organization responsible for finding new technologies to get a leg up on the Russians. Its lineage can be traced back to the Manhattan Project and the creation of the very first nuclear bomb.

Any weapon system, in order to ensure it functions properly, requires regular maintenance. This is perhaps even more true when that weapon system is powerful enough to pretty much destroy the entire world. The last thing anybody wants is for America’s nuclear arsenal to malfunction. We have the Department of Energy to thank for that not happening. It keeps an eye on the radioactive elements of these bombs and missiles, making sure they don’t decay to the point of no longer being usable. These are (by design) hugely unstable compounds that have to be handled by top experts.

Rick Perry, by contrast, holds a Bachelor of Science in animal science from Texas A&M University, and that’s it. His transcript isn’t even that impressive. It’s filled with a whole lot of Cs and includes a class simply titled “Meats” in which he got a D.

That’s not to knock anyone who participated in the Meats class. It’s just to say that there might be individuals who are better qualified than Perry to oversee an organization with such initiatives as “Space and Defense Power Systems”, which deals with radioisotope power systems. These power systems “convert the heat from the decay of the radioactive isotope plutonium-238 (Pu-238) into electricity.” They have numerous applications in the area of extraterrestrial national security and space exploration and have precious little to do with animal husbandry.

Overall, the fact that that the DOE has some serious national security responsibilities might come as a surprise to people — not least of all Perry, who, upon learning more about his new job, will elect not to gut the agency that prevents our nukes from decaying or self destructing. And hey, at least he’ll get to be in charge of the DOE’s other crazy research projects. Maybe he can finally bring his meats expertise to the table.