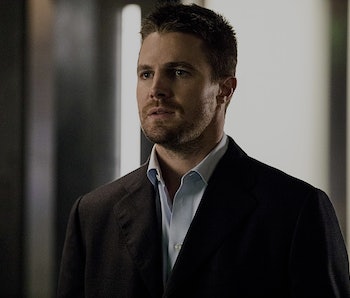 The mid season finale of Arrow snapped back to reality in the wake of the alien “Invasion!”, taking a hefty emotional toil on pretty much everyone in Team Arrow: Evelyn is a confirmed traitor, Felicity has lost her boyfriend, Curtis gets dumped, and Diggle has been captured. But they saved perhaps the most jaw-dropping moment for the final few seconds of this half-season. After a sad-and-wounded tryst with Susan Williams in her apartment, Oliver returns to the Arrow-cave for this bombshell to happen:

For some crazy reason and in some insane way, Laurel Lance is back. She turns around, smirking — or … sneering? — and says, “Hi, Olly.” before breaking into an all-out devilish smile. We know how much the CW loves actress Katie Cassidy, as they’ve brought her back on The Flash after her character’s death to play Earth-2 Laurel, and again on the 100th episode of Arrow where she was featured prominently as Oliver’s bride-to-be. But it sure does look like she was either revived or never really dead to begin with here.

How is this possible? What could this mean?

This would sure be a cheap shot if they had this be the final note of the half-season, only to have Oliver be imagining Laurel standing there. Many of the CW shows, Arrow the most so, have dabbled in the use of random hallucinations of past characters, both dead or otherwise. Even as recently as in The Flash’s mid season finale this week, we saw Cisco talk with his dead brother on Christmas. Olly is distraught after having accidentally killed Felicity’s boyfriend. He’s a veritable, emotional mess.

Some Sort of Shapeshifter Is Impersonating Her?

Those that watch The Flash might remember Hannibal Bates, a meta-human who became a shapeshifter after the particle accelerator exploded. Though subdued by Team Flash in “Who is Harrison Wells?” and ultimately killed by Joe West in “The Trap,” Bates might not be the only instance of a shapeshifter in-universe. And, get your tin foil hats: the name Hannibal Bates is written in “The List,” which has never really been explained. Could there be some sort of connection? Hmm …

Damien Darhk stabbed Laurel in the stomach with one of Oliver’s arrows in Season 4’s episode “Eleven-Fifty-Nine.” Though the doctors assured the team that she’d survive, she ultimately whispers one final thing to Oliver before dying. It was revealed in the Season 5 premiere that her last words were “Please … please don’t let me be the last Canary. That way, a part of me will always be out there with you.” The emotional potency has propelled many of Arrow’s successes this season, but if she never really died, it might cheapen that, even more so if she is somehow a villain.

She Was Resurrected by Some Other Lazarus Pit?

Despite returning to more street-level roots after weird detours through mysticism, magic, and metas, Arrow might be gearing up for a back half of the season that explains the resurrection of Laurel Lance through some other Lazarus Pit (the Nanda Parbat one was spoiled after it brought back Sara Lance, member?) or another mystical means.

Who Cares? Laurel Is Back and She’s Totally Prometheus

Whatever the reason or the mechanism, Lauren seems to be alive, and her weirdly forced smile seems indicative of something peculiar or even nefarious. Why would she appear now, after all this time? It’s awfully convenient considering the fact that Prometheus just made Oliver do one of the worst things he’s ever done. It stands to reason that Laurel might very well be the secret identify of Prometheus.

Oh well, I guess we’ll have to sit and wait until Arrow returns to the CW next year for the second half of Season 5.