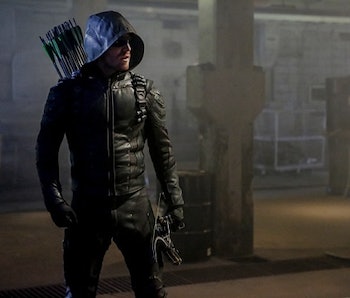 The fifth season of Arrow premiered on Wednesday night, and for fans who were, uh, displeased with recent seasons of the CW hit, the episode was something of a return to form. It also revealed the answer to a big, lingering question: Laurel Lance’s last words.

When Laurel, aka Black Canary, was fatally stabbed by Damien Darhk during Arrow’s fourth season, she made Oliver promise her something, but the camera pulled back and the sound faded out before viewers go to hear what that promise was. There were suspicions, perhaps, that she’d asked Oliver to fake her death, but it turns out the truth was something much more heartbreaking.

“Promise me I won’t be the last Canary,” she asks Oliver from her hospital death bed in a flashback, because that way, they’ll always be part of her with him.

The flashback comes at a crucial time for the Arrow team — or lack thereof. Things are in dire straights for Oliver when the episode opens. He’s lost faith, and returned to his killing ways alongside a depleted team of D-listers who he doesn’t trust yet.

Throughout the episode, Felicity Smoak pushes Oliver to keep the team going, and it seems like Laurel’s dying wish might be part of the reason why he’s going to give a new team a shot and perhaps find some peace himself.

Oh, and that evil, killer archer-ninja who showed up at the end looks pretty kickass too. Season 5 might just be all right.