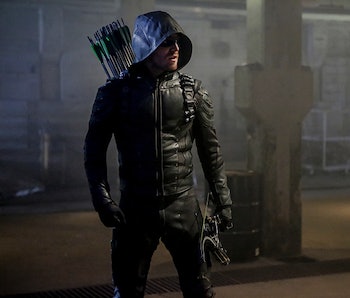 Maybe there’s hope for Oliver Queen and his bedraggled band of somewhat-super, not at all merry men (and women), because believe it or not, the latest trailer for Arrow Season 5 is incredible. After fighting Damien Darhk last season, Oliver Queen (Stephen Amell) is back to his old ways killing criminals in his ceaseless crusade to save Star City. But is executing criminals without due process what the Green Arrow stands for? With a new Team Arrow assembled, maybe we’ll know for sure.

Besides the return of Oliver’s murderous ways — and the return of flashbacks, which will reveal Oliver’s history with the Russian mob — there’s also the return of Diggle, aka Spartan. He’s in the Arrow Cave training the new recruits: Curtis Holt (Mr. Terrific), Evelyn Sharp (Artemis), Jack Wheeler (Wild Dog), and…hold up, is that a fourth new person right there in that group shot?

The new bad guy in Arrow is a mystery man named Prometheus with no relation to the existing character created by Grant Morrison. He takes up the frame in the final shot of the trailer, but seconds before that he’s looking friendly with the new Team Arrow recruits Wild Dog and Artemis. Does Prometheus actually join the team? Or do Wild Dog and Artemis betray their new mentor?

Hell, it looks like Arrow is all ready tell us who Prometheus is. That’s the same costume this dude is wearing, right? Or am I just seeing things?

Whatever, this trailer for Arrow is great and I’m excited just to be excited about watchng Arrow again. It’s been too long since I’ve felt this happy about the series. Maybe Reddit’s efforts worked out after all.

Arrow returns for Season 5 October 5 on the CW.