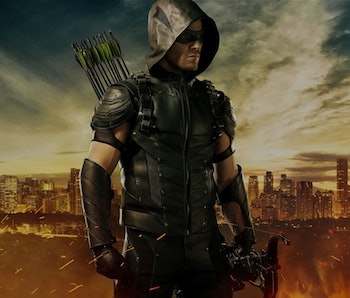 Wherever you stand on the most recent season of The CW’s Arrow — reviews seem to vary from “apocalyptically awful” to “sure, it had problems, but whatever, it was fine” — one of the unabashed joys of the show is its willingness to dive deep into the most obscure corners of DC Comics in search of characters. Heck, long before she made the transition from beloved supporting player to much-criticized star, Felicity Smoak started out as a minor player in the Firestorm comics, of all things.

So, independent of the actual quality of the episode being filmed here, let’s take a moment to appreciate the set photos below, which reveal the wonderfully motley assortment Oliver Queen has assembled to replace the old Team Arrow. Gone are the show’s takes on famous Green Arrow allies like Speedy, Arsenal, and Black Canary. In are such impressive replacements as… Evelyn Sharp, the Black Canary imitator from last season who is an adaptation of an old Birds of Prey character and is now taking on the codename Artemis! Mister Terrific, who as Curtis Holt spent a year being the de facto new Felicity as motor-mouthed science geek but is now decked out in T-shaped face paint and a jacket that says “Fair Play” on it – which is completely comics-accurate and one of the best things ever. Wild Dog, who… no seriously, who the hell is Wild Dog?

Even an expert on DC Comics lore could be forgiven for having never heard of Wild Dog. His costume — hockey mask, blue shirt with image of red laughing dog on it, camo pants — is, like Mr. Terrific’s outfit, exactly like that of the comics, which means a TV show in 2016 is faithfully recreating the aesthetic of a character who first debuted in 1987. Again, whatever else might be wrong with Arrow, that’s kind of wonderful. Anyway, the Wild Dog of the comics is basically a low-rent version of Marvel’s Punisher, as he’s also a former Marine who lost a loved one to the mob and became a violent vigilante. Except, instead of rocking an all-black, skull-themed getup like the Punisher, Wild Dog wears that outfit, because life is amazing sometimes.

The new season of Arrow debuts October 5. It may not be any good at all. But at least it’s going to feature some characters no one in their right mind would have ever, ever guessed would make it onto live-action TV.