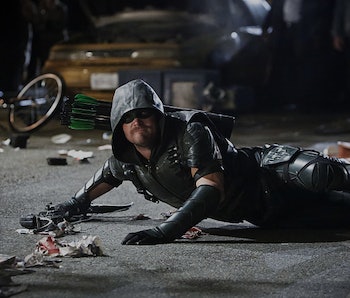 Maybe it’s time to call it for Arrow. The cornerstone of DC’s TV universe spiraled into an incoherent jumble of nonsense, stupidity, and pure bullshit in its fourth season it was almost impressive. The Season 4 finale “Schism” felt like a mercy kill — for viewers. Forget Star City — what can be done to save Arrow?

With 15,000 nukes in the air, the comic book series was comically absurd in its supposedly climactic showdown with the Green Arrow/Oliver Queen (Stephen Amell) against Damien Darhk (Neal McDonough) in a final showdown where stakes meant as little as every weak punch caught on screen. And that’s it! That’s the plot! Team Arrow and A.R.G.U.S. divert the nukes — okay, Felicity (Emily Bett Rickards) diverts the nukes, everyone else just punches bad guys — while Green Arrow fights Darhk in the streets of a chaotic Star City. Sure, the whole world was in danger, but it was just Star City we care about or see. The “climax” was a scaled-down imitator of Batman versus Bane in The Dark Knight Rises that was impressively even dumber and less fun to watch.

Speaking of dumb and hard to watch, Oliver’s speech on top of a car takes the cake as one of the most hilarious things Arrow has done. If only more people can stop riots from happening by delivering impromptu speeches on cars.

Reversing the fates from the Season 3 finale where Oliver left Team Arrow to be with Felicity in the suburbs, Diggle (John Ramsey) and Thea (Willa Holland) pack in their tights and masks. It’ll probably be temporary, but their reasoning is perhaps the only thing that makes sense.

For Diggle, it’s because he’s lost a part of himself when he killed his brother. For Thea, she hasn’t rested since her resurrection from the Lazarus Pit last season. With the two of them gone, plus Laurel whose death is still fresh, and Oliver is on his own. With Felicity. Oh, and he’s the mayor of Star City now. Because that’s how life works: Eventually, you get the things you abandon.

Is Oliver a killer again? When it premiered in 2012, Arrow was an interesting if also frustrating interpretation of the Green Arrow superhero, a Robin Hood/Batman hybrid whose left-leaning politics made him a soapbox for sociocultural commentary. Arrow vaguely had that notion, but was more preoccupied with the questionable morals of vigilantism. Is the law actually lawful when those in place exploit it for their own gain? If someone is capable, is it wrongful if they do not use it for a greater good? These questions have seeped into mainstream movies like in Batman v Superman and Captain America: Civil War, but Arrow addressed them years before and with proper build-up it seemed likely Arrow would have had a proper Green Arrow by Season 2 or 3, or even Season 4.

Here we are at Season 4 and I don’t even recognize Oliver anymore. He shouldn’t be the same vengeful vigilante after everything that’s happened with Malcolm Merlyn, Deathstroke, Ra’s Al Ghul, hell even his own mother. But he should still be Oliver, but right now this isn’t Oliver I’m seeing. This is a golem, in a green leather hood. I do not want to place blame on Felicity Smoak whose divisive place in the Arrow fandom brings to the table soft sexism, but Felicity has in fact been a damaging presence in Arrow. She’s enabled Oliver to be one of the dumbest superheroes of all time while she also contradicts every episode’s themes and numbs the plot from its edge. There’s never any worry when Felicity is around, she’ll just hack some shit.

Of all the characters to stick around in the finale, does it really have to be her?

Arrow phoned it in this season and in “Schism” especially. This was not a finale, this was a filler episode whose ending would have been great for an actual finale. But with poor build-up, unidentifiable stakes, some of the dumbest characterization seen in the genre, and generally awful construction of plotting and technical editing, and Arrow Season 4 ended with an embarrassing, hollow mess. Someone has failed this city.