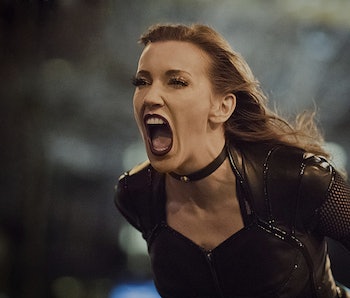 While fans of Arrow (or what’s left of them) are still mourning Black Canary, The Flash broke hearts on Tuesday night with the ruthless demise of Henry Allen (John Wesley Shipp), who fell, quite literally, at the hands of Zoom (Teddy Sears).

After Barry Allen (Grant Gustin) had his spirit renewed in last week’s “The Runaway Dinosaur”, the penultimate Season 2 episode “Invincible” knocks him down a peg, in order to get our hero to a place where he can really destroy Zoom in next week’s season finale.

While Zoom unleashes Earth-2’s meta-humans on Central City, Barry stays chipper. Interacting with the Speed Force in his dreams gave him a pep in his step even while the city is overrun by super-powered criminals. But one of those baddies, Black Siren (guest star Katie Cassidy, in a somber return), the Earth-2 doppelgänger of one Laurel Lance (the now-deceased Black Canary) wrecks havoc that tests Barry’s spirit. Cisco (Carlos Valdes) and Wells (Tom Cavanagh) make up a sound-based defense plan to render the Earth-2 criminals who vibrate at a different frequency easy to apprehend. But while Barry rounds up Black Siren and the Earth-2 metas, Zoom escapes to Earth-2 and hides out until the episode’s tragic end.

When Barry and everyone celebrates their calm after the storm, Zoom crashes the moment, takes Henry to Barry’s childhood home and kills him on the spot. If shit wasn’t real yet, then it just got real.

It’s a typical, tired trope: superheroes spurred on by a dead parental figures. But it’s a relatable motivator: they protect the vulnerable because at one point, they were vulnerable, too. Barry Allen was never special in this regard from his Justice League peers, but how The Flash finalized it was no less shocking.

The CW series The Flash surrounded its Barry Allen with loved ones, the likes of whom Bruce Wayne could never dream of having. Jesse L. Martin’s Joe West has been more than just a legal guardian for Barry; he’s been the true surrogate father figure that John Wesley Shipp’s Henry Allen couldn’t be. But that didn’t mean Henry didn’t love Barry any less, but “Invincible” at last shows how, realistically, their relationship would be fractured after their years apart.

When Barry goes off to patrol Central City again, Henry tries to warn him to be more cautious. In a lesser show, it would have been because Henry is worried sick that Barry is a vigilante, but The Flash has a firm grasp on its characters. Henry isn’t worried Barry is the Flash, he’s just concerned the kid is getting cocky. Their honest conversation about what’s bugging them was the fix The Flash needed for this somewhat unbelievable relationship: No way could they be fine when Henry missed out on Barry’s whole childhood and growth into adulthood. And they aren’t; “Invincible” expertly brings these tensions to the surface in a short few minutes.

And it becomes devastating when Zoom rips out Henry’s heart.

Zoom is getting desperate. He’s lost his grand meta-human plan and he’s lost Caitlin Snow (Danielle Panabaker), who opted to return to S.T.A.R. Labs after he gave her the choice. (What else could he have expected, really?) Killing Henry Allen was his last move in a plan that’s become increasingly unclear, especially now that he’s got what he wanted in Barry’s speed. There can’t be many aces left up Zoom’s sleeve, but whatever he’s got is bound to be disastrous.

Cisco’s visions of Earth-2 getting torn apart are ominous, but are they a part of Zoom’s plan in The Flash’s season finale? Or is it something else in store for the future?

Quick side note Arrow fans, Katie Cassidy shines as Black Siren, sporting a totally different personality that we never saw in that other CW superhero show. There’s no appropriate goodbye for Laurel, because this isn’t Laurel, and that was Arrow’s job even though those guys bungled it. S.T.A.R. Labs is keeping Siren a secret from Sara and Capt. Lance. It’s a smart move, I don’t think Capt. Lance can take another heart attack over his daughters, but it may also come back to haunt them, as these things eventually do.