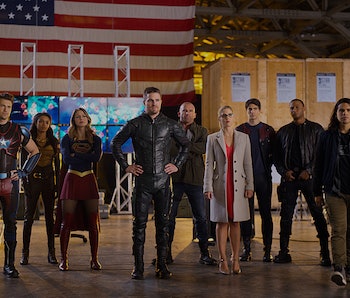 The portals are closed and the Dominators have turned back. After a bombastic Fall 2016 on the CW’s Supergirl, The Flash, Arrow, and DC’s Legends of Tomorrow, there are lots of questions to keep DC fans busy during hiatus. We’ve broken down our remaining questions on where the Arrowverse left off, and what’s in store when 2017 rolls around.

In a heart-pounding mid season finale in which Mon-El (Chris Wood) was knocked out, J’onn was in life-threatening danger, and Lena Luthor (Katie McGrath) had a temporary heel turn, “Medusa” wrapped much of the front-half season’s threads to give Supergirl (Melissa Benoist) a clean slate for the crossover. With that business out of the way, Supergirl gets a gift from Cisco (Carlos Valdez): a mini-portal generator and interdimensional communicator, allowing Kara to reach out to her Arrowverse BFFs when she needs them.

And that will probably be sooner than later: Lena Luthor is affirmatively pro-Supergirl, but her Luthor name means it’s only a matter of time until they come to blows. The Dominators are confirmed to return in Supergirl, and another crossover with The Flash will be, of all things, a musical! (And yes, we’re all stoked.) J’onn (David Harewood) is “cured” of his White Martian blood from M’gann (Sharon Leal), and Mon-El and Kara are beginning to acknowledge their mutual feelings for each other.

But the real spotlight romance has been Alex Danvers (Chyler Leigh) and Maggie Sawyer (Floriana Lima). Alex’s coming out has been a beloved arc as she ended the mid season finale happy with Maggie. Fans are crossing their fingers that it doesn’t end in misery or end at all.

Savitar is the future and The Flash is barreling towards a dark fate. Messing with the timeline and creating Flashpoint continues to haunt Barry Allen (Grant Gustin). Not only did it lure the Dominators to Earth and change everyone’s lives, it also brought the attention of Savitar who ominously claims to be “the future.” Savitar’s true identity remains unknown — fans have their theories, of course — while the Worst Coworker Ever, Julian Albert (Tom Felton) was correctly predicted to be Doctor Alchemy, Savitar’s number one acolyte.

At least the hatchet is buried between them. Julian is now a friend and ally of the Flash, who also gained Jesse Quick (Violett Beane), Kid Flash (Keiyan Lonsdale), and Jay Garrick (John Wesley Shipp) as dependable speedster allies. Expect a huge showdown come the end of The Flash Season 3.

The show that started it all entered a resurgence in Season 5. By “looking back to move forward,” Arrow has returned to the gritty roots of its earlier years while building upon the roads its traveled since its premiere in 2012.

While training a few rookies that he directly inspired, the Green Arrow (Stephen Amell) juggles vigilantism and politics as the mayor of Star City. But in the mid-season finale, “What We Leave Behind,” the Green Arrow went 1-on-1 with Prometheus, who is all but confirmed to be the son of a target the Green Arrow killed in his first, bloody year as a superhero.

But the weak sauce reveal of Prometheus was forgiven with the shocking return of Laurel Lance (Katie Cassidy). Is she really alive? Is she a clone? A parallel Earth doppelgänger? From an alternate timeline? Forget Prometheus, the real attraction of Arrow in 2017 will be the return of the Black Canary.

In absence of Rip Hunter (Arthur Darvill), the Legends are now led by Sara Lance (Caity Lotz) and have done a surprisingly decent job protecting the timeline from aberrations. In Season 2, the Legends met the equally legendary (and secretive) Justice Society of America, leading Vixen (Maisie Richardson-Sellers) to board the Waverider.

In the mid season finale, the Legion of Doom assembled: the Reverse-Flash, Damien Darhk (Neal McDonough), Malcolm Merlyn (John Barrowman), and yes, Al Capone. The Legion of Doom are searching for the Spear of Destiny, the one that pierced the side of Christ during his crucifixion. Also, Rip Hunter was revealed to be alive and well — and an asshole, working as a hot-tempered movie director in 1960’s Los Angeles. The Legends continue to pursue the Legion of Doom while also dodging what may come of the ominous message left by a worried Barry Allen from the future.

Supergirl, The Flash, Arrow, and DC’s Legends of Tomorrow return in 2017.