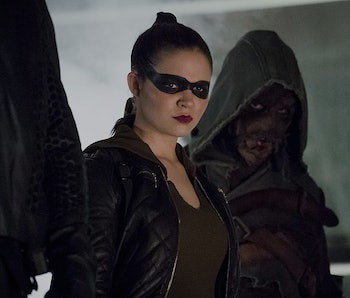 The rookies of Team Arrow had their time in the spotlight during the Arrow portion of the crossover event “Invasion!” (alternatively “Heroes v Aliens”), teaming with The Flash (Grant Gustin) and Supergirl (Melissa Benoist). But one of them sat out the party: Artemis, played by Madison McLaughlin. After last week’s reveal that she’s working for Prometheus, her absence is even more suspicious when no one bothers to ask where she is. Just where was Artemis in the crossover?

“It’s funny, to be honest with you, in the break of [episode] 508, we talked a lot about, ‘Do we have her in there?’” Guggenheim told reporters during a screening. “It felt like it was the elephant in the room and we didnt want it distracting, so we don’t reference it in large part because Im not a fan of, ‘Oh, it’s too bad that Evelyn’s mom is sick this week.’ I would prefer to just whistle past the graveyard.”

Guggenheim then said that Artemis isn’t gone forever, and that next week’s episode of Arrow will get a huge payoff to her reveal in “Vigilante.”

More interesting than her absence is confirmation that Artemis hasn’t been working for Prometheus the whole time. According to Guggenheim, Artemis decided to betray Team Arrow offscreen during the season’s sixth episode, “So It Begins.”

“Rewatch episode 506,” said Guggenheim, “If you view the end of 506 and her final scenes with Oliver as, ‘Oh, shes lying,’ I think you see when she decided to team up with Prometheus. Basically in the commercial break between Act 5 and Act 6 [of “So It Begins”], that’s when she made the decision to join up with Prometheus. So while people were watching car commercials, that’s what she was doing.”

While Artemis may have taken a week off from Arrow, McLaughlin still gave a shout out to the show’s production on its landmark 100th episode.

The invasion of the Dominators will continue tonight on DC’s Legends of Tomorrow.