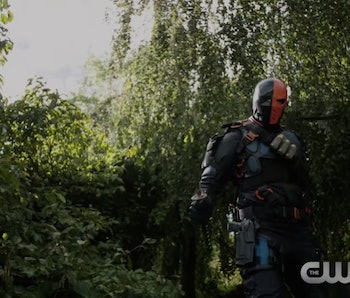 In the third episode of CW’s giant four-show crossover event, half the cast of Arrow ended up in the Matrix, and honestly, it was the best thing that’s happened in a while.

The “Heroes vs Aliens” arc of Supergirl, The Flash, Arrow, and Legends of Tomorrow ostensibly started with Supergirl on Monday, but things didn’t really kick into gear until The Flash on Tuesday night, when the alien Dominators mind-controlled half of the superhero mega-alliance and everyone beat the shit out of one another, Civil War-style. When the dust settled, half the team — Oliver, Diggle, Sara, Thea, and Ray — got abruptly abducted by the Dominators. Arrow’s opening scene showed us all where the alien invaders put them: into the fuckin’ Matrix.

And that’s where the Arrowverse became great again.

The opening scene of Arrow is a trip: it starts out with Ollie running through the woods in a callback to the early show’s island plotlines, but when he comes out of the brush, shit gets wild. Oliver Queen isn’t in an costume, he’s in a green hoodie, and he’s going for a jog on the grounds of a the massive Queen mansion-estate. He comes inside and take a shower with his fiancée, except holy shit it’s Laurel. That’s right, the Arrowverse decided to throw most of its main characters into an alternate universe where Oliver is a normal rich dude getting married to Laurel, as if he never took the Worst Boat Trip Ever in Season 1 at all.

It quickly becomes apparent that the heroes are in a simulation of real life, kept prisoner in space-pods while the Dominators “probe their subconscious” or something (according to Ray at the end of the episode, whatever, we’ll figure it out tomorrow). But the universe inside is honestly way more interesting than the one out of it. It’s like a bizarro second-Flashpoint, and it’s completely awesome. Let’s recap here a second: Diggle is the Arrow, and is badass. Oliver’s parents are alive. Laurel is alive. Palmer industries is Smoak Industries, Tommy Merlyn is a doctor or something in Chicago (probably because Colin Donnell was busy), Sara is just hanging out, oh, and Captain Lance actually likes Oliver. At that point, Oliver was already starting to catch on that someone was playing games with his head, but if he wasn’t, Captain Lance being nice to him should have been a dead giveaway that something was completely effed.

Oliver, Diggle, and the rest of the still-alive team Arrow figure out that they’re in a simulation, and start to congregate to figure out a way out. On the outside, a combination of Team Flash/Arrow/ Legends/Supergirl are working to figure out where the Matrix’d squad is being hidden, but honestly, nobody really cares because Deathstroke is back. Sure, it’s probably not Manu Bennett under the mask (he doesn’t talk, so it’s probably just a stuntman), but the final showdown is still pretty bad-ass. When the team realizes they’re in a simulation, the Dominators deploy a squad of Arrow villains past, present and future (the Dark Archer! Damien Darhk!) to stop them breaking out of mind-jail. It all goes down on Oliver and Matrix-Laurel’s wedding day, which is heart-wrenching in and of itself. After Laurel’s death back in April, the Matrix-Arrowverse is the first time most of the team has been able to interact with Laurel. The tearful goodbye between Sara, Oliver and not-real Laurel when the team has to leave the simulation is the closest thing the CW has had to emotional depth on a show not named Supergirl in months.

The team is eventually picked up by the Legend’s time-ship after flying a Dominator-pod off of the alien’s mothership. All will be (mostly) resolved, most likely, during Legends of Tomorrow Thursday night.