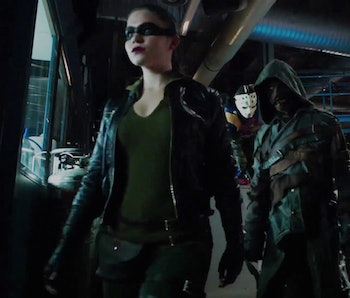 At the end of the last episode of the CW’s Arrow, it appeared as though an off-the-wagon Quentin Lance was the deadly supervillain Prometheus. Fans were pretty sure that this was just a red herring — that he was being framed — and although Wednesday’s episode seemed to confirm that Quentin is innocent, the hour revealed that another one of Oliver’s so-called “allies” has been working against him.

In the last few moments of the episode, “Vigilante,” after Oliver and Thea ruled Quentin out as a suspect, the show cuts to a shot of Artemis standing on a roof, seemingly alone. She turns to face Prometheus, and tells him that the Green Arrow doesn’t suspect a thing.

It’s a major, major twist. The new Team Arrow was just starting to come together, and Artemis’ betrayal has massive implications for Oliver — and further complicates theories as to who Prometheus really is underneath all those hoods and rags.

Of course, there’s a chance that there’s yet another twist buried under this one. Fans of Young Justice know that going turncoat is kind of Artemis’ thing, or at least pretending to. There’s a chance that Artemis is still a good guy, and this is all part of some larger plan, but it doesn’t seem that likely at the moment.

The bulk of the rest of the plot was spent hunting down Vigilante, an old Alan Moore creation with an incredibly on-the-nose name. The rogue hero is meant to deconstruct just what it means to be a, well, vigilante. Though Oliver didn’t learn his true identity, the fight did seem to strengthen his resolve, even if his stance on killing is still a little unclear (it seems to be “murder is bad, but never say never”).

Oliver is headed to a massive crossover with the other CW shows in two weeks. Perhaps we’ll know what the deal is with Artemis by then.