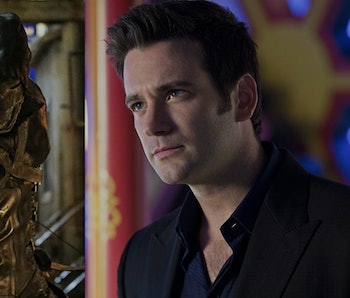 The CW’s DC shows revel in a good supervillain mystery. The Flash energized its fandom by obscuring Zoom’s identity last season, and the show is at it again with its newest villain, Alchemy. Arrow has joined the secret villain identity game too, keeping Prometheus’s true identity under wraps. Who is Prometheus? Arrow fans discussing their theories online are confident they’ve figured out the most likely candidate: Tommy Merlyn.

After five years of vigilantism stories which slowly veered into the supernatural, Arrow has returned Oliver Queen (Stephen Amell) to fighting street crime and gangs as he did in Season 1. The return to form is lending credence to the notion that one of the Green Arrow’s oldest friends is now his newest enemy, especially since producer Marc Guggenheim said Oliver “bears a measure of responsibility for the creation of Prometheus.”

Introduced in Season 1, Tommy Merlyn (Colin Donnell) was Oliver’s closest pal before the shipwreck on Lian Yu. When Oliver returned after five years, Tommy tried to resume their frat boy lifestyle but Oliver’s secret superhero life — plus a love triangle with Laurel (Katie Cassidy) — strained their friendship. In the Season 1 finale, Tommy died saving Laurel, just before learning Ollie was “the Hood.”

Guggenheim later said in another interview: “Everything we’ve been trying to do in Season 5 has been building off of our history, our long history, because that’s something that the other shows just can’t do.”

If Season 5 is about “legacy” and “looking backwards to move forwards.”, then it must purposeful that Prometheus recalls the Dark Archer, Oliver’s first nemesis who was Tommy’s father Malcolm (John Barrowman). In the most recent episode, “So It Begins,” Prometheus reveals through a killing spree he knows “The List,” the names of Starling City’s corrupt elites Oliver killed when he began his crusade. This guilt weighed heavily on Oliver’s conscience, and though he spent the last few years trying to make up for them, it’s clear he can’t escape them.

Fans online, especially on Reddit’s /r/Arrow, are pointing out how Tommy could be Prometheus (who was confirmed at San Diego Comic-Con to not be based on the Batman villain created by Grant Morrison). It comes down to several important details, from visual references to the thematic significance.

If Tommy is Prometheus, then his resemblance to the Dark Archer should be no mistake. Prometheus’s outfit looks like a tattered and worn combination of Oliver’s original Arrow costume plus a League of Assassins uniform, the secret cabal of killers Malcolm Merlyn was a member of before he rose to its highest title, Ra’s Al Ghul.

One Redditor, Ben-94, has pointed out how Malcolm may be the true villain again — another callback to Season 1 — and that Prometheus may just be a puppet, or an avatar to do his bidding.

Nobody comes out of the Lazarus Pit the same

Introduced in Season 3 and used to revive Sara Lance (Caity Lotz) in Season 4, the Lazarus Pit can revive the deceased but not without violent side effects. The Pit was guarded by the League of Assassins until it was destroyed, just as the League disbanded. But Malcolm is more than resourceful enough to use the pool and train his now-unstable son in secret.

It’s also possible Tommy, who was a party boy for most of his life, could become a killer given the Lazarus Pit’s powers. Everyone who has been revived by the Pit has demonstrated bloodlust towards somebody they love, including Sara and Thea (Will Holland). If Tommy loves Oliver, as best friends do, it’s not far-fetched that the Pit would direct Tommy’s wrath to Oliver.

The Greek origins of Prometheus also provide a clue

Reddit user Jironobu provides a convincing theory that Tommy is Prometheus through a knowledge of Greek mythology. In short, Prometheus was the Greek Titan who was saved by Chiron by being shot by Heracles’s arrows. Chiron was also an archer, and is the symbol of the astrological sign Sagittarius, which happens to be the name of one of the companies Merlyn owned that produced his titanium arrows.

The full theory from Jironobu is below:

Prometheus was a Titan, and was credited for stealing fire from Olympus to give to mankind, but he was chained and left for dead by the gods as punishment. However the centaur Chiron sacrificed his immortality in exchange for Prometheus’ freedom/life. This was achieved by having Chiron being shot by one of Heracles’ arrows which was coated in a Hydra’s blood.

Now Chiron was a centaur, and the archer that trained Achilles. He’s also the symbol of the astrological sign Sagittarius, the Archer. Sagittarius was the name of one of the companies Merlyn owned in season 1, which he used to produce his arrows.

So, if you consider this as relevant, and some kind of allegory, Merlyn is Chiron/Sagittarius, who sacrificed something to give Prometheus his freedom/life back. Of course the list of people Merlyn would even consider sacrificing himself for is… small. In other, semi-relevant stuff, this would also make Thea the Achilles of this story, being trained by Merlyn.

It’s not a perfect allegory. If Prometheus is meant to signify sacrifice, then who’s sacrifice is echoed: Tommy Merlyn’s, who died to save Laurel in the Season 1 finale? Or is it Malcolm Merlyn’s, who has sacrificed quite a lot — his company, the League of Assassins, even his hand — to revive Tommy?

Who else could be Prometheus?

From my point of view, Tommy Merlyn would be a great Prometheus, but reality tends to suck the fun out of things. Although Colin Donnell has expressed interest in returning, he’s currently on Chicago Med and anything involving an official return has been only rumored at best.

But that means there are other great candidates for Prometheus. Some fans have named Robert Queen, Oliver’s father, whose death began his superhero journey. There’s also Billy, Felicity’s new boyfriend and a complete blank slate, as well as Anatoly, Oliver’s mentor in the Bratva whose whereabouts are unknown. Fans also haven’t ruled out supporting characters like Maseo from Season 3, an Earth-2 doppelgänger of Oliver (thanks to The Flash), and even Shado, another one of Oliver’s love interests whose relationship tore him apart from Slade, inspiring him to become Deathstroke.

But one thing is for sure: Nobody is buying Quentin Lance.