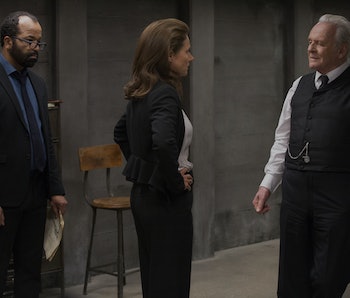 Although the 1973 Westworld movie eventually turns into a bloodbath, there was never a guarantee that the HBO series would take the same route, but that all changed in the seventh episode, “Trompe L’Oeil.” Spoiler alert: the hour concluded with our first major character death in the form of poor Theresa.

It’s certainly possible that Ford will replace her with another off-the-books host, but Theresa the human is definitively toast. And that’s not even mentioning the prostitute host Clementine, who also saw her own version of death when she was decommissioned. Now that the door is open for character deaths — especially since HBO has been coy about which actors might return for Season 2 — we can logically assume more bodies might fall by the end of Season 1. Here are the most likely contenders.

The reveal that Bernard is a host changed the game in several ways. In the immediate future, it limited Bernard’s probable life span on the show. Since Ford is able to command him to kill a woman he thought he had feelings for, there seems to be no end to the power Ford can exert over him. If the board grows suspicious about Theresa’s disappearance, he could very well use Bernard as his attack dog. That won’t end well for Bernard. Barring that, if Ford falls and Delos employees discover Bernard’s status as a host, he’s in danger of being decommissioned. It seems to be a lose-lose situation for him.

When we last saw Elsie, she had just discovered a secret plan to smuggle data out of the park. She then vanished when a figure emerged from the darkness and grabbed her. Conventional wisdom says she’s toast, although it’s certainly possible Westworld is faking us out. But at the moment, Elsie’s odds of survival look slim.

Charlotte Hale is the current face of Westworld’s mysterious board. At the moment, she seems powerful: She decommissions the host Clementine, fucks the bandit host Hector, and throws her weight around the Delos office. On the other hand, Theresa demonstrates what happens to people who try to exert power over Ford’s creations. Charlotte could be in line as Bernard’s next victim.

By literally controlling life and death in the park — murdering powerful employees; creating secret hosts off-book — Ford is currently the most powerful man on the show. By that token, he should be the last man standing. On the other hand, if Westworld decides to go the Game of Thrones route and axe the seemingly most important character played by the most famous actor, that could mean he’s the first to fall. Game of Thrones aside, if we look at Westworld’s own mythology, Arnold was previously the most powerful man in this world who fell to an unknown and ominous fate. Ford has explained that it was because Arnold sympathized with the hosts over humans — and yet the reveals about Bernard and Ford’s host-family shows that he, too, has been spending more time with hosts than humans.

Dolores is the show’s biggest wild card. She’s a wide-eyed Alice in Wonderland-type who is self-aware — “I don’t want to be in a story,” she tells William in “Trompe L’Oeil.” She also says, “I’m not a key, I’m just me.” If that’s true, then her place on the show is safe. But if Westworld has revealed anything in its first seven episodes, it’s that nothing is as it seems. Dolores has been hearing voices in her head and Bernard’s status as a host calls into question the timeline and purpose of their interrogation sessions. All signs point to Dolores being far more significant than she seems, and if that’s the case, she could be a wild card contender for a big finale death.

We’ll find out when Westworld’s first season comes to a close — unless it wants to postpone its reveals.