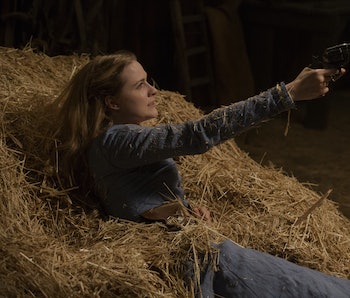 HBO’s Westworld is jam-packed with literary references, from Shakespeare to Sherlock Holmes. The third episode “The Stray,” contains the show’s most on-the-nose literary reference yet: Alice in Wonderland. During an off-the-books interrogation scene, in which robot programmer Bernard seems a bit too hopeful about testing Dolores’s capacity for consciousness, he has her read a passage from the Lewis Carroll classic. She reads,

Dear, dear! How queer everything is to-day. And yesterday things went on just as usual. I wonder if I’ve been changed in the night? Was I the same when I got up this morning? I almost think I can remember feeling a little different. But if I’m not the same, the next question is, Who in the world am I?

Although the Westworld writers are using this passage to evoke Dolores’s burgeoning self-discovery and increasing agency in her world, and creator Jonathan Nolan pointed out her physical resemblance to Alice, that’s hardly the only reason it’s featured.

Alice in Wonderland has a long history with sci-fi narratives — recall the “follow the white rabbit” sequence in The Matrix.

Although The Matrix is the most iconic sci-fi story about conspiracies and artificial worlds to emerge from the late ‘90s and early 2000s, it’s hardly alone. The Thirteenth Floor, The Truman Show, and Dark City all explore similar themes. Nodding at the Alice in Wonderland tale has become a shorthand for a creator to say, “Yes, this is one of those stories.”

And because it’s been used so often, it feels pat by now. Obviously we know these stories; it feels like the creators are beating us over the head with them. But the common theme in these movies is that a young man slowly becomes aware of the artifice of his reality. By placing Dolores front and center, Westworld is indeed following in the traditions of these stories, but it’s also returning the story to its original focus on a female protagonist.

Between its brothels and shootouts, it’s easy to see why Westworld is already being dismissed as yet another Prestige TV show gleeful in its violence against women. It’s a violent show, but women are hardly its only victims, and we never see an actual rape play out onscreen. To describe it as middle-of-the-road macho TV is a lazy generalization.

Everything about Dolores — from her seemingly overwrought love story to her Disney Princess appearance — feels like a deliberate commentary about women in these kinds of narratives. Her placement at the center of the story is a fresh new direction for the conspiracy sci-fi mold. Like everything else in the show, the Alice in Wonderland nod can be looked at as another eye-rolling trope we’ve seen a thousand times — or you look beneath the surface and see how self-aware the show is. Westworld is not for everyone, but for those who chose to linger in the park for a spell, even its most seemingly obvious corners have unexpected turns. So why not take the red pill and see how deep the rabbit hole goes?