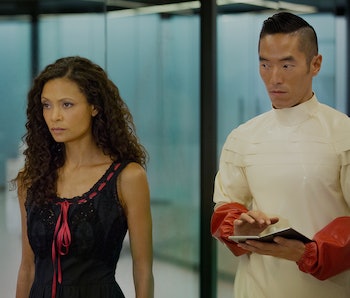 We gravitate toward our preferred genres of entertainment because of the way they make us feel. Westworld isn’t quite a sci-fi parable or a period piece; it’s a hybrid of the two. The resulting tone is constantly shifting and evolving, just like the show’s mysteries. While you wait impatiently for the next episode, chasing that feeling in other forms of fiction might seem as abstract as the Man in Black’s quest for the Maze. But if we break the sixth and most recent episode up into its individual parts, there are actually plenty of books that evoke the same emotions. Here are five to start with:

Science fiction has grown more diverse lately, but it’s still far too rare to find a woman of color at the center of a story. That’s part of the reason why Maeve’s plotline in Westworld feels like a breath of fresh air — aside from Thandie Newton’s stellar acting, of course. “The Adversary” was the most compelling episode yet because it let Maeve take charge and took a deep dive into her psyche. If you’re looking for a similar focus in your sci-fi, look no further than Octavia Butler’s classic novel Kindred. Although it contains no robots, it shifts between past and present and features the kind of heroine we don’t see enough in sci-fi.

As “The Adversary” revealed, when Ford gave Teddy his new backstory featuring the villainous Wyatt in the third episode, the show was not being entirely up front with the audience. After his tune-up, Teddy has been more inclined to violence than ever, and his connection to Wyatt seems more complex than he lets on, as this episode’s flashbacks featured him killing soldiers by his side. Further, although Wyatt was supposedly his sergeant, we see Teddy in the uniform. Although, it’s still unclear how his storyline with the Man in Black will resolve, it’s safe to assume things will continue to be bloody and we will continue to get poetic flashbacks. That same feeling soaks the pages of Cormac McCarthy’s starkly lyrical, uber-violent Western classic Blood Meridian.

3. The Mechanical by Ian Tregillis

Another part of why Maeve’s story was so compelling in “The Adversary” is that this is the most self-aware and human we’ve seen a host be thus far. Dolores has had her moments too, but she hasn’t awakened to the true nature of her world to the same extent that Maeve now has. If you find self-aware automatons compelling, they feature prominently in Ian Tregillis’s novel The Mechanical. Only, instead of the Old West, the setting is 1920s France and the Netherlands, but in a similar way as Westworld’s hosts, they are enslaved by humans.

In Elsie and Bernard’s storyline, “The Adversary” focused more strongly on the corporate espionage aspect of Westworld. Both are happy employees who have functioned in Westworld for a long time — Elsie says to Bernard, “You’ve been here forever.” And yet, as smart and content as they are, they both can’t help chasing leads to dubiously deserted areas. Similarly, in Scott Westerfeld’s Uglies trilogy, the main character slowly becomes awakened to the horrifying nature of her world. The deeper she explores, the more corruption she uncovers in the forgotten corners of her otherwise bright surroundings. It’s a YA series, but YA books are kickass too.

“The Adversary” puts the programmers front and center more than any other Westworld episode has so far. We get to know Felix and Sylvester — the two techs who become ensnared in Maeve’s story — and we see Felix’s moral dilemma as he exposes Maeve to the hands that made her. Margaret Atwood’s The Heart Goes Last is about a corrupt corporation. The story focuses on a prison rather than the Old West, but it evokes the same tone and even features sex robots. We see characters performing shady operations on each other and large-scale corporate espionage.

More like this
Entertainment
Feb. 1, 2023
We Finally Know Where Westworld Will be Available to Stream
By Dais Johnston
Entertainment
Jan. 31, 2023
Dune 2 Will Be Hilarious, Says Actor Whose Character Killed His Own Dad
By Ryan Britt
Entertainment
Jan. 22, 2023
The Last of Us Episode 2 trailer teases a big reveal
By Claire Fox
LEARN SOMETHING NEW EVERY DAY.
Related Tags
Share: