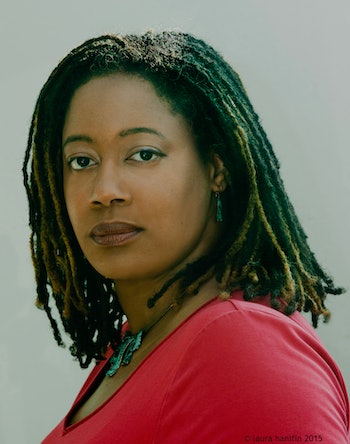 In Asking the Prophet, we use our alien probes on the brains of sci-fi, fantasy, and speculative fiction writers. This week we spoke to N.K. Jemisin, author of Broken Earth trilogy and the Dreamblood novels (and perennial Nebula and Hugo Award nominee). Jemisin is interested in how cultures will persist in the deep future and how identities grow organically and inorganically out of conflicts, debates, and breakthroughs.

How do you approach world building?

I often have dreams of a strange scene and then I build things that explain it. With the Inheritance trilogy, I dreamt of seeing a little boy who was playing with a floating ball, kind of like in the movie Labyrinth. In this case, they were planets. I just knew he was a guy — I didn’t know why or how. I had to find a way to explain that in my head.

Do you do much research to help inform your work?

I live near the Brooklyn Museum, which has a really nice Egyptian collection. At one point I got a chance to go to London. I’ve got some family there, so I made a research trip out of it. I visited the British Museum, which is known for having a gigantic collection of Egyptian artifacts — a lot of them taken against the will of the Egyptian people. But still a nice collection of things to look at and enjoy. So that was really helpful. I always do a lot of reading about mythology. I’ve been a giant fan of mythology since I was a kid.

I didn’t set out to make the Dream Blood about Egyptian mythology. I just started imagining what it would be like to have priests who would creep into your house in the dead of the night, kill you, consider it to be a holy duty, and believe that they were doing a good and wonderful thing — even if they did this horrible thing. It wasn’t specifically Egyptian in my head, but as I developed the world, I decided to make it fantasy Egyptian.

How have you seen the sci-fi and fantasy genres evolve during your time in them?

People are actually acknowledging now that the geek world is just as problematic as the mainstream world. For a long time, people told themselves this hogwash myth that there was no racism or sexism in science fiction and fantasy. People told themselves we’re all nerds and we’re the misfits of mainstream society — so, of course, we don’t do the same thing regarding bullying and harassment that people did to us as the nerds in school. At this point, Gamergate alone pissed all over that.

Even before that, there was plenty of evidence that that simply wasn’t true and really had never been true. Even though women have always been part of the science fiction scape, even though people of color have always been part of it. The same exclusions have happened; the same patterns of ingroup and outgroup abuse and acceptance. So I think one of the big changes is that people are starting to talk about these things and are beginning to do something about it, although those initiatives take different forms and set off controversies and backlashes. But I still think that overall we’re making progress. It’s a good thing.

What do you think is the most helpful way of making progress?

Talking about it, drawing attention to it. Putting forth recommendations so that people notice works that had been marginalized or overlooked before. Having discussions about the ways problems tend to manifest. For example there’s a discussion going on right now about the Locus Awards list and the fact that the YA novels in that list are by authors who basically aren’t really thought of as YA authors. YA readers probably haven’t heard of most of these people. They are all male and the YA field is primarily female. So it’s a little odd that the Locust list does not reflect the actual genre of Young Adult fiction. There’s a conversation that’s already started about that, and I hope things like that will help bring attention to the problem that caused it.